The Simpson’s – ‘Black characters should be played by black actors’, but WHY are people angry about Bart Simpson and Darth Vader? CLICK FOR ALL DETAILS! 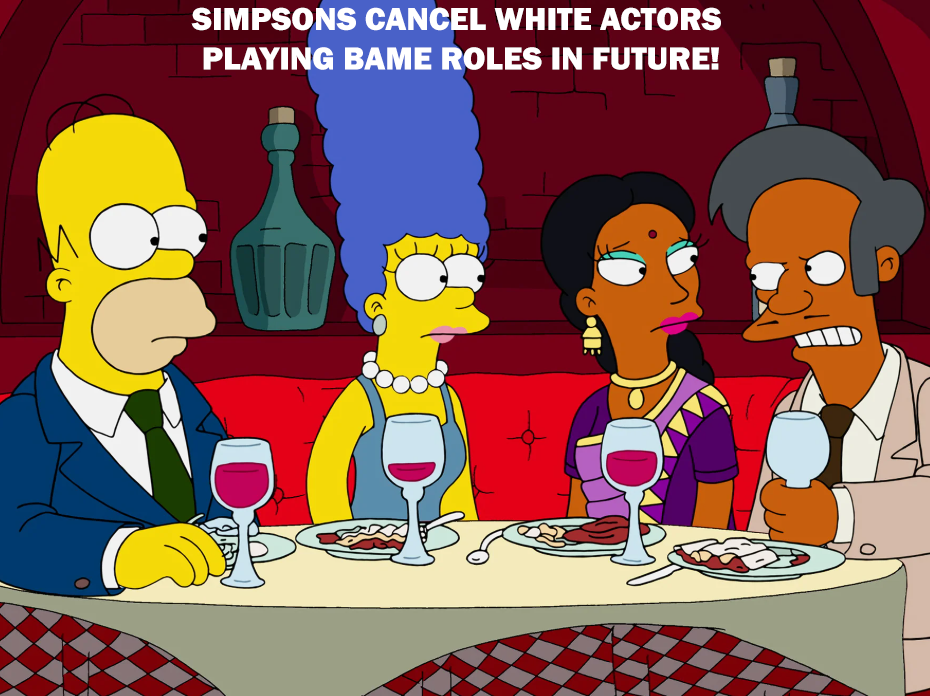 Producers and Voice actors of America’s favourite animated family, The Simpsons, have come to the decision that BAME characters will now only be played by people of the same ethnicity.

The move comes after the show faced backlash for its past episodes which featured characters in “blackface”, and the use of other racially motivated tropes or stereotypes. In 2017, actor Hank Azaria made the decision that he would no longer voice the Apu character due to its use of racist Indian stereotypes. Fox has come to this decision in solidarity with the global ‘Black Lives Matter’ movement.

In a statement, the owners of the show Fox said: “Moving forward, ‘The Simpsons’ will no longer have white actors voice the non-white character“. This means the Simpsons will now have to find a new voice actor for some of its most loved character such as Dr Hibbert and the legendary CARL CARLSON!

While this change in staffing at the Simpsons, the reaction has divided the Simpsons fanbase, with many social media’s commentators attacking the move as tokenism, in support of the Black Lives Matter movement.

It is right that in 2020 characters of colour are played by people of the same colour, however, this has raised questions from “fans” who are crying foul about how Bart Simpson, a 10-year-old boy who is played by an older woman; or the Darth Vader character, which in the original movies was played by David Prowse yet voiced by acting legend Jamer Earl Jones.

My suggestion or advice is that people should stop using these equivalences, they are silly. The fact is that MANY ‘young boys’ in animated shows are voiced by women, this is very very common (Dragon Ball z’s Goku is voiced by a very old lady in Japan!).

There is a valid discussion to be had, but using Bart, or Darth Vader, is reaching at best, and a strawman argument at worst; equivalence like this devalue the entire debate.

Sure, it might look like ‘tokenism’, and to an extent, it probably is, however in many cases of tokenism, the tokenist gesture is only needed to make up for a past transgression; in this case, if Fox had cast BAME actors from the start, all the way back in the ’90s, these ‘tokenist’ gestures would not be needed now.

Of course, most who enter this discussion do not understand that it is not so much about white people playing black people, but more about representation of BAME actor. Casting White actors in a black role really is a disservice to all other black actors who could have played the role.

What Is the problem?

Let’s use the example of Eastenders, an Engish show. Imagine every character in Eastenders was Scottish or even American but talked in an English accent. Sure, everyone would still play an English character, but would the show be representative of the Britains unique mix of race and culture? No, it wouldn’t. It would be fake, non-representative and people in England would not like that. This is the problem, its about representation.

IN closing, what bugs your writer within this whole debate is that while people of colour will now rightfully be represented by people of the same ethnicity in the Simpsons; Fox still has a problem with how it represents other white entities outside the USA.

The way Fox depict us Brits is, in most cases, quite horrible (in the context of this article). In The Simpsons, Americans are made to think that British people either act like extras from the Downton Abbey movie, soccer hooligans or antiquated peasants; All existing as offensive stereotypes.

End Rant by a Ranty Scotaman

There is one character which above all is absolutely a nasty stereotype of a single nationality, Grounds Keeper Willie. Your Scottish writer will never truly understand why us Scots can be ridiculed (framed as PERVERTS in some cases) so harshly, but, its probably because we still find it funny.

There is a massive debate to be had when it comes to Actors and people acting in BAME roles. In a perfect world, this would be a no brainer, but in 2020 we are anything from a perfect world. We need to focus on pulling together, and for many white people, perhaps its time to give a tiny bit back; Think of it as a deposit for a much happer future on this planet!

Follow Voice Britannia on Facebook and join the conversation!
This topic is ripe for discussion, but do not be subverted by those nasty people who wish to turn these topics into a race war, just stop that now, please. Make Love, not war!