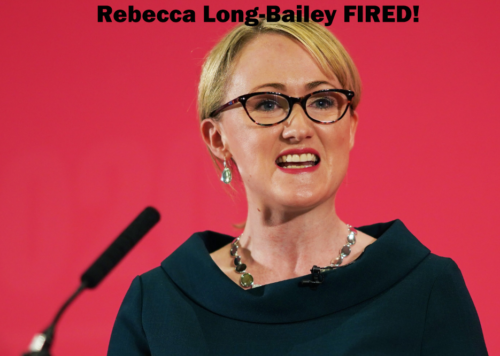 UPDATE: John McDonnell has commented on the situation. Scroll down to see it!

The shock sacking follows Rebecca Long-Bailey sharing an article by Maxine Peake (which can be read below) which is said to contain anti-semitic conspiracy theory.

however influential left-Wing commentators have already attacked the move. Columnist Ash Sarkar called it a “disgraceful decision”, pointing out how this decision makes it near impossible to talk about Israel and their actions against Palestine without being labelled antisemitic.

Labours former shadow-chancellor, John McDonnell has said on Twitter: “it’s always been said criticism of practices of Israeli state is not antisemitic. I don’t believe therefore that this article is or Rebecca Long-Bailey should’ve been sacked. I stand in solidarity with her”

Do you think Rebecca Long-Bailey has done anything wrong or is this a step too far in censoring what people say about Israel’s politics? Follow us on Facebook and join the conversation!