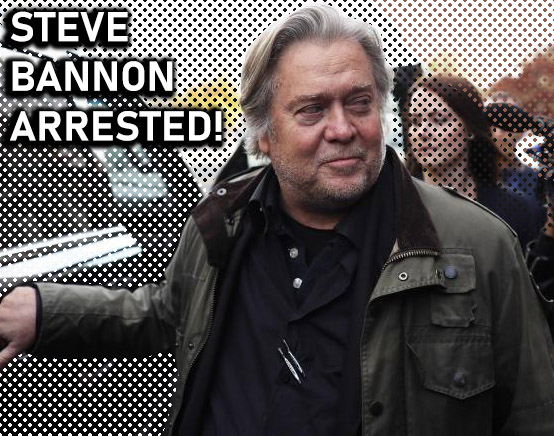 BREAKING: Former Trump campaign strategist and friend of Boris Johnson, Steve Bannon has been arrested on charges of defrauding donors in a ‘border wall fundraising’ scheme.

(Updated to add details on Bannon’s arrest, those arrested with him, who he was arrested by and a link to the now unsealed indictment.)

It is reported that Federal prosecutors have today charged the reported brains behind the Trump campaign Steve Bannon and three others with ‘defrauding donors’ out of THOUSANDS of dollars in a so-called fundraising campaign to raise money for famous Mexico border wall.

Steve (Stephen) Bannon (66), Brian Kolfage, Andrew Badolato and Timothy Shea were taken into custody by agents from the US Postal Service in relation to an online crowdfunding campaign named “we build the wall”.

Steve Bannon, as well as being known as the brains behind the Trump campaign is also reported to be close to Boris Johnson, Nigel Farage and other right-wing political figures. His arrest will no doubt lead to questions asked of those who are known to be close to Bannon on their relations with the businessman.

Sources close to VB report the charges are in relation to a ‘$25 MILLION scheme’ and consist of ‘conspiracy to commit wire fraud’ and ‘money laundering in connection to a crowdfunding campaign to build a border wall’.

More information will be added as it is released.