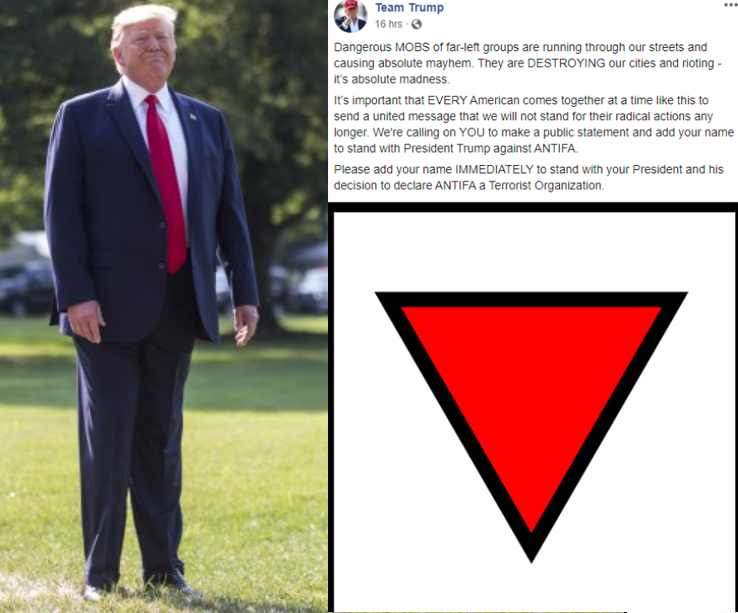 The ‘upside-down red triangle’ logo was specifically used by Nazi’s to identify ‘anti-fascist’ and other ‘political’ prisoners in concentration camps. Team Trump directly associated Donald Trump’s desire to label “ANTIFA” a terrorist organisation with the Nazi’s symbol for political prisoners.

Yesterday President Donald Trump attacked “radical” far-left groups and attempted to associate them with an ‘upside-down red triangle’ symbol; The symbol was previously used within Nazi concentration camps to identify the prisoner type.

In the bizarre, and now-deleted rant, Trump used his ‘Team Trump’ account to state “Dangerous MOBS of far-left groups are running through our streets and causing absolute mayhem”. After claiming ‘radical’ groups like ANTIFA (who he claims is also Black Lives Matter) was “destroying” American cities.

The post concluded with the command to “IMMEDIATELY” add their name to “stand with your Presidents decision to declare ANTIFA a “Terrorist Organisation.“.Trump supporters were then presented with an image of an ‘upside-down red triangle’; a symbol made infamous by its usage in the Nazi concentration camps during WW2; millions of Jewish and political prisoners were murdered in German concentration camps.

Nazi concentration camp badges were primarily made with a combination of triangles and formed part of the identification system in the Nazi camps. The triangles were used in concentration camps in German-occupied countries to identify why prisoners had been placed there.

The Nazi’s triangles badges were made of fabric and were sewn on prisoners clothing. The badges all had specific meanings, indicated by their colour and shape. The badges allowed guards to quickly see if someone was a convicted criminal, Jewish or a political prisoner (communists).

The use of the upside-down triangle is an indication of the histories Donald Trump is drawing inspirations from.

While the post was deleted, many are angry that a US President used Nazi symbolism to attack his political enemies.