The power of Diversity – Why Ofcom was right to defend Diversity’s Black Lives Matter performance. 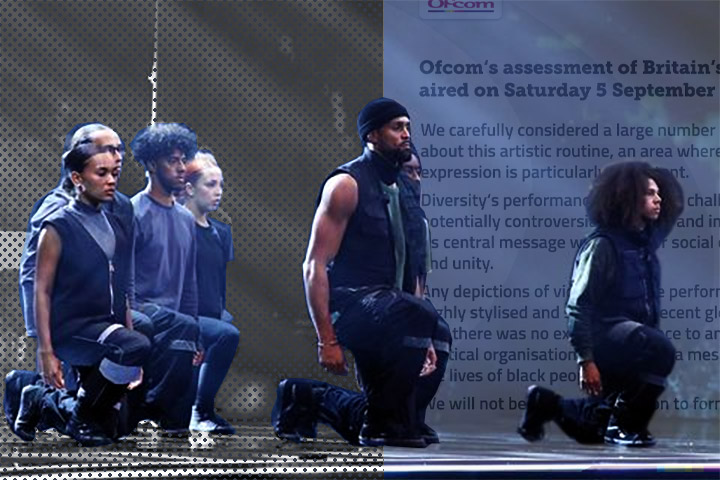 At the time of writing, nearly 24,000 people have complained to Ofcom about Diversity’s Black Lives Matter performance, aired on Britain’s Got Talent on 5th September.

Fortunately, their complaints have fallen on deaf ears, with Ofcom stating that the “central message was a call for social cohesion and unity.” Ofcom is to be commended for taking a supportive line; the performance was inspiring and uplifting, with a thoroughly hopeful message.

So what could anyone have had against it? While it might be tempting to assume every one of the complainants to be puce-faced bigots, it’s not helpful. To my mind, there are three broadly intersecting groups among them. Each of their positions is wrong, but for different reasons.

First among the complainants are those who think that ‘politics’ should be kept out of light entertainment. If you like your Saturday night television to be pure escapism, or perhaps you’re the parent of impressionable children, then you might not want to be thrust into the business of explaining the complexities of race relations over dinner.

You can even hold this position while being broadly sympathetic to BLM’s campaign for social justice. Nevertheless, this position is misguided. The arts are not just glitter on the clothing of life; they speak to our deepest, most profound emotions. In 2018, Ashley Roberts performed a deeply moving dance routine on Strictly Come Dancing, using her medium to express her feelings over the death of her father.

It was phenomenally powerful, and no doubt many recently bereaved viewers will have been moved to tears by it. This is part of the often messy experience of being human – and it shouldn’t be cast aside. Moreover, none of us should be impartial in the fight for social justice.

There is no legitimate argument in favour of arbitrary murder by police officers; this is not a debate in which both sides have merit. Diversity was not making a controversial point, civilised society should have no place for racism.

The second group are those who mistakenly believe that any group or campaign which centres in ethnic or racial identity is intrinsically wrong. This is a binary belief, sometimes well-intentioned, rooted in the idea that the colour of someone’s skin should matter less than the content of their character. Some might call this a desire for society to be ‘colour-blind.’ Again, this position is misguided.

Diversity was drawing attention to a society that is decidedly not colour blind.

Evoking the murder of George Floyd, placing beloved entertainer Ashley Banjo at the centre of a depiction of George’s murder, their dance was a reminder that black lives are too often beset by specific trauma, challenges and risk.

Black Lives Matter is not a movement in favour of black supremacy or the oppression of non-blacks, it’s a movement to address the unique set of injustices suffered by black people. We have grown up in a society that has seen organisations united on the basis of race stand for hatred and bigotry; the Klan and the EDL stand for little but violence and terrorising of groups they don’t like – the same is not true of BLM.

The third and final group of complainants are… well, they’re the racists. The bona fide, knuckle-dragging, still-vote-UKIP racists.

What they object to, and will always object to, are strong and proud BAME people claiming their right to be regarded as full citizens and human beings. They are terrified of a world in which fair and equitable treatment is given to all, and they’ll rail against even the most modest attempts to bring that world into being.

One of the great strengths of Diversity’s routine was the way it emphatically proved the racists wrong. It was a display of talent, athleticism, teamwork, beauty and unity. It was noble but accessible, tragic but triumphant. Racism will never create anything as magical as that.