TORY WORLD OF SLEAZE: Conservatives refuse to suspend rape suspect – Why this is disgusting! (Opinion) 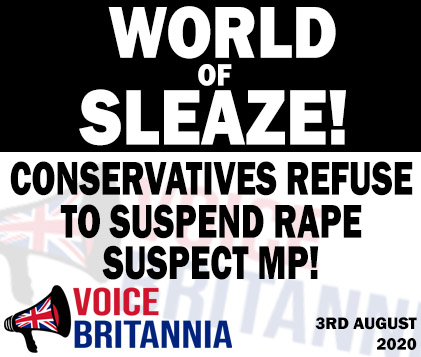 Yesterday, news broke of the latest sleazy scandal within the ruling Conservative party. News broke of an MP being arrested and ‘released-on-bail’ on suspicions of rape against a woman who also works in the parliamentary estate!

Bizarrely, and unlike most workplaces in the UK, or anywhere in the CIVILISED WORLD, the suspect has not been suspended by his Conservative employers – shining a light on the increasingly murky and sleaze-filled world of the conservative party!

Sleaze is something the conservative party has a long and detailed history with, but not since the death of Stephen Milligan has the party had to deal with anything on this level. Much like the Milligan incident, the tories have taken the decision to ‘protect the party and its members’ no matter how bad it makes them look to the public.

Stephen Milligan was found dead in his home after dying from autoerotic asphyxiation. In the aftermath, the Conservative party attempted to smear Milligan’s character, with then Prime Minister John Major describing him as “he must have been pretty unhappy, pretty miserable”. This was an effort to bury the truth by framing Milligan as ‘depressed’ or suicidal, when in reality the accident was most likely just a man, having fun on his own and accidentally harming himself.

As the rape-allegation story set fire to Sundays news cycle, we learned that Government ministers knew of the alleged incident as long as four months ago, yet, the LEADER OF THE HOUSE Jacob Rees-Mogg and the Tory Chief Whip (THE SUPERVISOR) Mark Spencer both did nothing! No suspension, no investigation, nothing!

Government are allowing this man to continue working IN THE SAME BUILDING as the woman who reported the rape! There is no alternate universe or framing of this incident which is acceptable.

A Conservative ‘spokesperson’ (ROBOT) told the press: “These are serious allegations and it is right that they are investigated fully. The Whip has not been suspended. This decision will be reviewed once the police investigation has been concluded.”

“The whip has NOT been removed”

Just let that sink in for a moment. This means the MP can still vote on legislation that affects every single one of us. The suspected rapist is STILL allowed to go to work, where the victim works and where one of the incidents was said to have happened!

How is this situation any different from a sexual abuser representing themselves in court so they can further abuse their victim via the witness box?

Let me tell you a story from my past. Years ago, I worked for a selection of ISP’s in technical support roles and got myself into a bit of ‘trouble’ after being cheeky to a rude customer, then hanging the phone up on them while laughing. While this was investigated by my then-employer I was suspended (WITH PAY) for a month.

Once the investigation was complete I was allowed BACK to work. There is NOTHING controversial here. This is how workplace incidents are investigated fairly! When someone is accused of a potential crime against another member of staff in a workplace, the standard practice is to suspend those involved so that a proper investigation into the incident can happen!

I struggle to understand how an employer in 2005 can have a more robust system of workplace compliance and discipline than the people who are literally running the UK in 2020!

Governments assertion that they cannot suspend or take action against this MP without the public learning about the suspect before they legally should, is nonsense. Unless the suspect is a cabinet minister, it would be very easy for someone to be suspended and the story lost in the mess of zoom conferences and proxy votes!

The fact the suspect is a sitting MP makes this situation significantly more complex. Every person deserves a fair trial and MP’s are no different. However, while society must avoid the temptation to turn stories like this into an episode of ‘trial by media’; in this case, there is a public internet argument.

It infuriates me to know that people accused of some of the worst crimes are allowed to work freely within the parliament; in the same building as his potential victim!

Regardless of where the incidents were said to have happened, both the victim and the suspect work in the same building. It is not only unfair but a complete ignorance of the victim’s rights. No person deserves to be made a victim then forced to work with the reported abuser.

The ONLY fair and proper way to deal with a situation like this is to suspend both the suspect and the victim from the workplace so that the investigation into the incident can be done without produce. By all accounts it seems that Government ministers and conservative party staffers knew about this incident months ago, yet did nothing about it, leading to the police intervention this weekend.

Governments reaction to this, the protection of the suspect’s identity and the refusal to investigate the incident properly is in itself damaging. Who exactly is this man? Why to the Conservative party feel the need to defend him so vigorously on such an abhorrent charge?

Do they have no shame?

At the end of the day, I am firmly in the belief that public interest will trump all in this case. And hey, If for any reason Government does not name or at least suspend the MP, sources have told us that it will be made public on the 1st of September when the House of Commons resumes after the summer break.

Tories, please, do the right thing and take action, as there is NO public relations officer on the planet who will be able to bury a story of a political party hiding reports of rape within their organisation!

Whether it happened or not, that woman deserves her case looked at fairly, which means the MP HAS to be suspended and the whip removed!

That IS the bottom of the Tory barrel! And the end of the day, if he is innocent then he will go back to work. This is not about trial by media and labelling someone as a rapist; this is about being fair to the victim, temporarily suspending someone she reported to the police to rape, and allowing justice to take its course.

There is no lower than this!