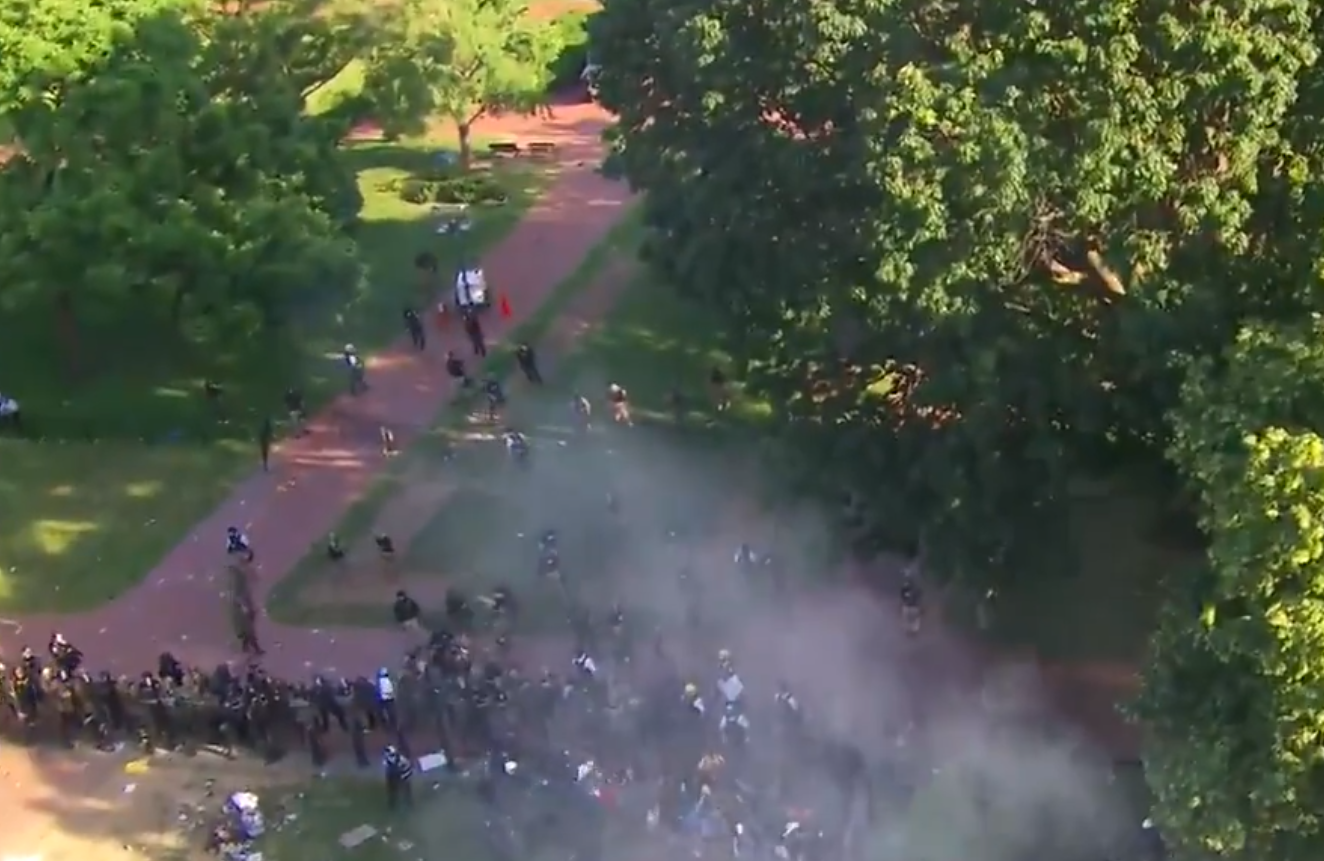 In shocking scenes which played out live globally on CNN, the world witnessed what has been described as “Trump declaring war on America”.

Early in the evening, while peaceful Black Lives Matter / George Floyd protests were happening around Washington DC, President Trump announced he was to speak ‘soon’ in the Rose Garden.

At around 6:30 pm, Police, Secret Service troops and the Military, in riot gear, began to advance on the protestors. The city of Washington currently has a 7 pm Curfew.

At 6:41 pm, the collection of security forces which had amassed put on their gasmasks before attacking the peaceful protesters with teargas, shields and batons.

Around 10 minutes later, Trump appeared in the Rose Garden to make his speech, Trump stated …

“All Americans were rightly sickened and revolted by the brutal death of George Floyd. My administration is fully committed that for George and his family, justice will be served. He will not have died in vain, but we cannot allow the righteous cries and peaceful protestors to be drown out by an angry mob. The biggest victims of the rioting are peace loving citizens in our poorest communities and as their president, I will fight to keep them safe. I will fight to protect you. I am your president of law and order and an ally of all peaceful protesters. But in recent days, our nation has been gripped by professional anarchists, violent mobs, arsonists, looters, criminals, rioters, Antifa and others.”

As President Trump made his speech, the sounds of the militaries tear gas and flashbang grenades could clearly be heard in the distance, Trump went on to say …

“If a city or state refuses to take the actions that are necessary to defend the life and property of their residents, then I will deploy the United States military and quickly solve the problem for them. I am also taking swift and decisive action to protect our great Capitol Washington DC. What happened in this city last night was a total disgrace. As we speak, I am dispatching thousands and thousands of heavily armed soldiers, military personnel, and law enforcement offices to stop the rioting, looting, vandalism assaults and the wanton destruction of property. “

In his speech, Trump stated that, to protect Americans “second amendment”, he will be trying to invoke the 213-year-old ‘Insurrection act of 1807’, which he believes will allow him to send troops into American states. (at publications 2 states have said this will not happen).

While CNN’s journalists were doing their best to mentally process the scenes they had just broadcast, which showed police attacking peaceful protesters juxtiposed, side to side, with the president making his speech where he said he was going to take this action.

Around 10 minutes later, it became apparent that Trump had used the Military, Secret Service and Washington DC’s police against the protesters as he required a safe path to the historic St. Johns Church, across the street from the Whitehouse.

In scenes which were described as ‘bizarre’, once at the church, President Trump had his picture taken in front of the boarded-up St. Johns church (without permission) with a bible, before walking off.

What transcribed in the preceding 30 minutes, on live television across the world, was a grotesque publicity stunt, more akin to the kind of actions of one of WWE’s ‘heel’ management officials.

Most grotesque of all are the reports which are coming from the Whitehouse that describe the reason Trump turning the army on peaceful protesters. CNN is reporting that Trump was offended by the negative coverage of him ‘hiding in his bunker’ last night, so he created this disgusting photo-op which used real-life members of the public, which he had attacked with grenades batons and rubber bullets! As a show of absolute power.

There are no words which can describe what has happened in the last hour as anything other than the actions of a fascist dictator. America may have entered its most dangerous period in its history.

To each and every person who is attending protests and fighting the fight on the front lines againt neo-fascisim. Stay safe and know that you have global solidarity with the millions who agree its time to stop treating one human different to another because of skin colour. Skin colour never hurt anyone, fascists did!