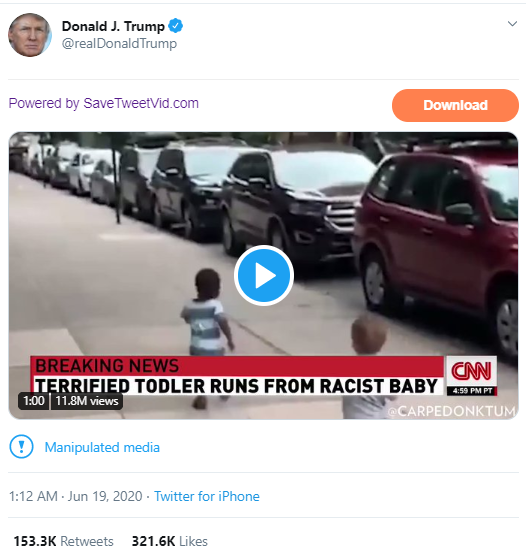 IN the last 24 hours, US President Donald J Trump had one of his campaign ads removed from Facebook for breaching their T+C’s. Then, overnight, Twitter flagged a Trump campaign video as “manipulated media”. The doctored video attempted to show how CNN reported a baby as racist.

As reported by Voice Britannia yesterday. Donald Trump campaign page called on supporters to label ANTIFA as ‘TERRORISTS’. In the bizarre post, Trump tried to associate ANTIFA with an upside-down red triangle icon; which was used by the Nazi’s to identify political prisoners within German concentration camps during WW2.

While many thought ‘Team Trump’ had a brief moment of conscience and deleted the post (seen below); it turns out Facebook are the ones who pulled the post as it breached their Terms and Conditions.

At around 8 pm last night (EST, 5 hours behind the UK) Donald Trump posted a video to twitter. The video shows a black child running from a white child, with a supposed CNN ‘chyron’ (on-screen text) that read “TERRIFIED TODLER RUNS FROM RACIST BABY” (yes, ‘toddler’ was misspelt).

Breaking the video down

The video posted by President Trump appears to show a CNN broadcast which is reporting on a story about a white racist BABY!

The video shows a white toddler chasing (playing) another, black toddler down a road with the words “TERRIFIED TODLER RUNS FROM RACIST BABY” on screen.

The screen then goes black with white text telling the viewer “what actually happened”. The video then shows the original clip, with the two boys running towards one another and embracing.

The screen then goes black again and says “AMERICA IS NOT THE PROBLEM” “FAKE NEWS IS” “IF YOU SEE SOMETHING, SAY SOMETHING” “ONLY YOU CAN PREVENT FAKE NEWS DUMPSTER FIRES”.

Twitter was quick to mark the video as fake news (manipulated media). With CNN very quick to call out the truth.

The Truth and fallout

The original video told the story of Maxwell and Finnegan, two best friends; two babies too young to realise the struggles that can come with race. The video shows the boys running down a street and embracing, in one of the most heartwarming images of 2020; an image which broke race and political boundaries showing that we are all people and we CAN love one another.

Twitter was quick to act, and flagged the video as “manipulated media”. This is the third time Twitter had taken action against the Toxic sometimes racist rhetoric which is posted by President Trump.

CNN (obviously) never used the headline “TERRIFIED TODLER RUNS FROM RACIST BABY”, this IS the fake news. The Trump campaign (or someone within, who also can’t spell) added fake CNN Chyron headline as an attempt to make it appear that CNN are calling babies racist.

The reality of this situation is that Donald Trump’s team has appropriated a video of two baby American boys and without their permission, he has used them as political propaganda in his fight to justify himself as NOT being racist.

Public reaction to Trump’s latest attempt to mislead his base has attracted anger from many for the heartless, and objectively tasteless exploitation of children in his quest to appear non-racist; and win his second term as president. We considered writing a monologue on our feelings on this abuse of media, but Twitter celeb Jeremy Newberger said it better than we ever could.

(Some Trump supporters have attempted to defend this stating “this was not made by Team Trump; although, the fact Trump posted this directly to his Twitter timeline means he is the publisher and it is him who is at fault!).