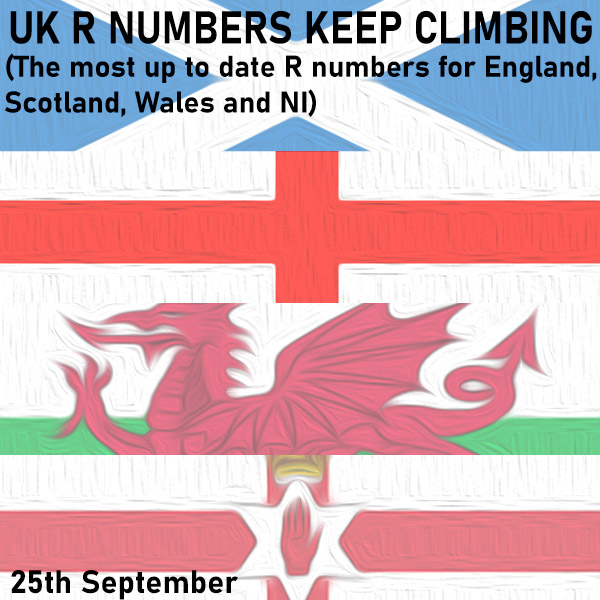 The UK government and devolved nations have published the most recent estimates of the COVID-19 reproduction rates (R number).

As predicted, reproduction rates have continued to climb as COVID-19 spreads across the UK again. Unless a national lockdown is announced, we can expect to see the R numbers climb to potential new highs in the next few weeks.

The UK government has announced a very small (optimistic) increase in their R number, from 1.4 to 1.5. The most concerning statistics today are the growth rates in London and the North West.

With growth rates of almost 10%, officials could easily lose control in these areas. London has been placed on governments “COVID watch list”, which could lead to a lockdown of London. Local lockdowns are already in place in much of the North West.

We are fast approaching the point where government will have no choice but to lock the UK down; tripping Boris Johnson’s metaphoric ‘circuit breaker’. All four nations are in a position where infections are multiplying at a more aggressive rate than we saw during March/April.

Further accelerating the R numbers are schools, colleges and universities. It is no coincidence that when schools went back the infection rates soared, but the problem has no easy solution.

Universities and colleges should probably never have reopened. In most cases whatever is being studied at college or university can be one remotely. Allowing universities to physically return was one of the riskiest decisions made by the government.

The biggest problem government now faces is that they have painted themselves into a political corner; any decision to close schools would have to be part of a national lockdown (so people could look after their children). A second lockdown would be an admission of failure from Boris Johnson; Something the PM clearly wants to avoid.