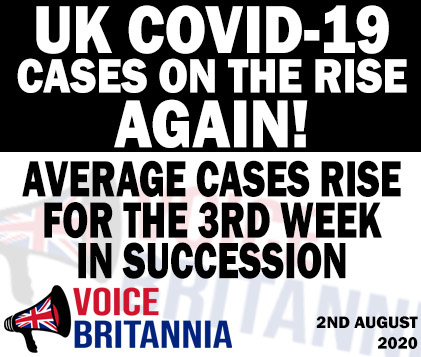 The average amount of new COVID-19 cases in the UK has been seen to rise again for the 3rd week in a row; adding more credence to speculation of a second COVID-19 wave beginning to take effect in the UK.

The following week (ending 18th July) had an average of 610 cases reported. Below, we have listed the averages for the ‘daily new cases’ detailing the last 5 weeks. (We have bolded and coloured the highest and lowest weeks).

Earlier this week, both SAGE and CMMID produced their most recent R-number predictions, with both groups stating the UK’s reproduction rates are climbing. The amounts of new cases reported over the last three weeks, and the accompanying daily averages, provide clear evidence that the second wave of sorts has begun to take hold in the UK.

Read our recent article on the UK’s ‘R numbers’ here.

While a second wave looks to be starting we are in a better position to deal with COVID-19 now than we were in March. Remember, keep your distance, wash your hands, cover-up; and pay attention to the scientists!