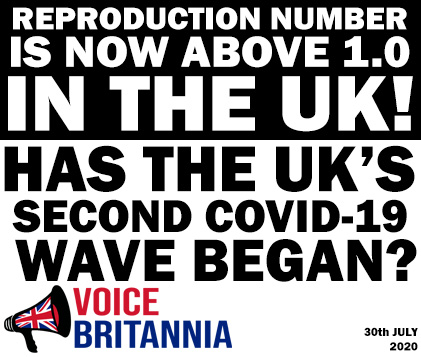 The latest statistical modelling data from CMMID is showing that the UK-Wide COVID-19 reproduction (r) number is likely sitting back above 1.0 in most UK Regions. This news comes as Government warns of a second Coronavirus wave heading towards the UK!

These reports by CMMID use historical and current medical data to ascertain what the R-number was, and what it will be in the future.

The most recent modelling data shows that the UK’s R number has risen above 1.0 for the first time in over a month.

Modelled only 2 days prior (12th July), the previous R-number showed the UK was sitting at a reproduction rate of 0.8.

The reproduction rate jumping 3 points, from 0.8 to 1.1, in only 2 days, is likely to be a major point of concern. It is just over 3-weeks since ‘Super Saturday’ and UK Government reopened England’s pubs and venues that were ‘COVID safe’ to the public. People are likely to relate the bump in the R number with the early relaxation of lockdown.

The scientific consensus is that takes around 3-4 week to see any observable effects of the lockdown being relaxed too early.

Looking at the regional breakdown, the outlook looks similar to it did last week with only the North West and Northern Ireland listed at sitting at 1.0 or higher. However, when we look at the potential R-ranges, we see that MOST of the UK’s regions (and nations) could be sitting above 1.0, with Scotland being as high as 1.4!

London, the North East, the North West, Northern Ireland, Scotland, the South West and the West Midlands all potentially have an R number above 1.0.

Today, Government have indicated that they are preparing to extend the number of days people have to ‘self isolate’, from 7- 10, and possibly more travel restrictions as an attempt to stop a ‘second wave’ in the UK.

The government have announced that they will be changing the advice and possibly bringing in new guidelines today in an effort to stop the ‘second wave’ from taking hold in the UK – which most-likely means more lockdown whether local or nationwide.

(Since this article published, Englands CMO has officially upgraded the self-isolation time from 7 to 10 days).