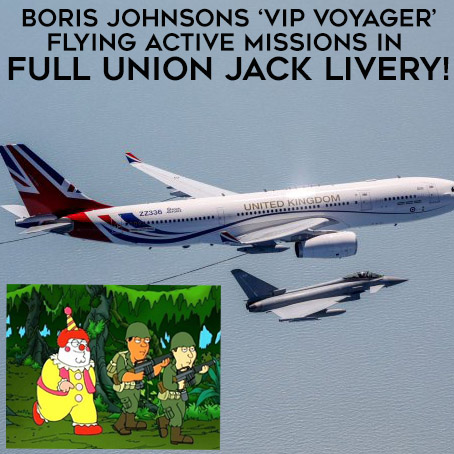 Voice Britannia has learned that the RAF’s A330 ‘Voyager’ aircraft ‘ZZ336’ that Boris Johnson spent £900k to have repainted in the Union Jack colours; has been taking part in RAF tracking Russian warships as they pass through the North Sea.

Over £900,000 of government money was spent on the refurb. The Prime Minister ordered the paint job as he believed the Voyager’s operational grey SKY CAMOUFLAGE, was ‘boring’.

Speaking to the Guardian in June this year, defence analyst Andy Netherwood said the “shiny red, white and blue livery means the RAF will be reluctant to use it outside the most benign airspace

“No one wants to go to war in a jet painted like a brightly coloured lollipop.”

It turns out the VIP Voyager (ZZ336) is still being used in RAF operations around the British coast. On Monday an RAF P-8A Poseidon was on its first real ‘prolonged’ operation tracking the Russian Warship ‘Vasily Bykov’ as it sailed through the north sea. The P-8A was supported by two Typhoon Fighter Jets, and the Union Jack painted VIP Voyager ZZ336.

Since Boris Johnson spend £900k on the union jack paint job for the voyager; the jet has not been used for any VIP transport, and instead was returned to RAF duties, assisting with training and patrols around the UK.

The painting of the VIP Voyager also has rendered the jet useless for many tasks. In emergencies, Voyagers have previously been used to ferry troops to warzones and provide support to combat operations in the middle-east; which, needless to say, is a bad idea when your jet is painted in the most visible colour scheme possible!

Voice Britannia has confirmed this story with MOD officials and would like to thank them for answering our questions.