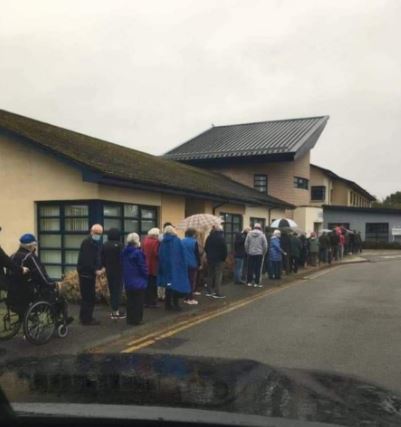 Hundreds of medically vulnerable people were forced to queue outdoors in wind, rain and freezing temperatures as the yearly flu vaccine season get underway in North Scotland. Voice Britannia was informed patients had been told: “not to bring a coat”.

Patients were told to visit Invergordon (North Scotland) medical centre for their yearly inoculations; however, it soon became clear that every patient had been given the same 9.30 am appointment time. And, to make matters worse, every patient has been told not to be a coat; meaning many vulnerable people were forced to wait in the horrible conditions.

Cromarty Firth Councillor Maxine Morley-Smith used social media to highlight the situation; Writing an open letter to the hospital which contained a shocking image of the large queue this morning.

The image uploaded by Councillor Morley-Smith shows around 40 to 50 older people waiting in a tightly packed queue; With social distance looking difficult to maintain.

While you can see it has been raining, the image does not do the weather conditions justice. This Morning, Invergordon and much of the UK have been battered by the heavy rain and wind of Storm Alex. At the time the photo was taken weather conditions were very wet, with temperatures as feeling like 6°c at 9.30 am today.

In her letter, Councillor Morley-Smith said: “Today, several hundred people it appeared were given the same tie of 9.30 am to turn up for a flu injection at the county hospital. They were advised not to bring a coat!

“Did you even think this through? Its pouting rain today and is 6°. The very nature of patients who need the flu injection are that they are elderly or vulnerable. They are now standing in the rain freezing and getting soaked. I think the risk of getting ill is heightened.

Why didn’t you organise attendance in the academy as before or enquire which other large buildings were available?”

This years flu vaccine season is predicted to be one of the busiest on record. he COVID-19 pandemic has meant that flu vaccine is to be prioritised to those who need them. This prioritization means those who were told to attend for vaccines this morning will have been in the group most at risk from becoming seriously ill with Flu and Coronavirus.

NHS Highlands have serious questions to answer in regards to why hundreds of vulnerable people were forced to queue tightly packed outdoors without a coat – at the front door of a hospital, during a pandemic that affects older and vulnerable people the hardest.