We need to talk about the ‘Karen’ phenomenon. An American trend we need to resist! (‘Karenmania’ video included). 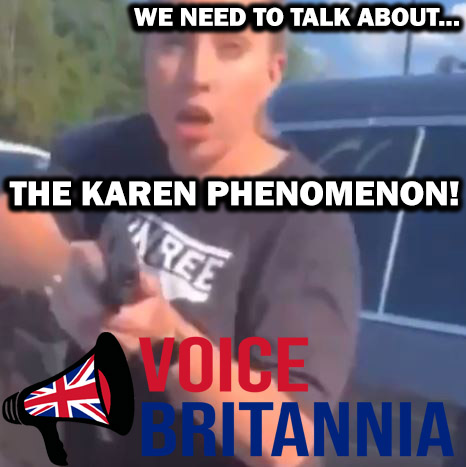 We need to act now to stop this trend before it can take hold in the UK!

I admit I am a low-level, male-version of a ‘Karen’, I can relate, and think (hope) most others can. However, the levels of anger we are seeing within contemporary Karenisim is now way off the charts in comparison to my own Karenist ways. At my worst, you may here me demanding for a call-centre manager, not trashing ASDA’s healthcare aisles!

If you have no idea what I’m talking about and have been asking yourself ‘who the hell is this Karen girl?’ let me quickly explain, actually, just watch the video below to find out EXACTLY what am talking about.

One of this weeks most read VB articles was about a drunken incident where an English woman was abusive to another woman for ‘speaking Polish too loudly’ in a pub. Parallels were drawn with the recent ‘Karen’ trend, and it really got me thinking more about the whole fad. Having previously worked in retail and call-centres, and being ‘passionate about good service’ myself, this is a topic I have a strange affinity with.

Throughout the week, we have seen people both attack and defend the “Karen” term, with some calling it sexist, some not liking it as its a bit scuzzy, and those idiotic others, the “white lives matter” types, who argue it’s racist!

Is the term ‘Karen’ sexist?

I want to address the criticisms of the term head-on. First, is the term ‘Karen’ sexist? For argument’s sake, I guess it could be viewed as a tiny bit sexist. However, My view is that its simply a descriptive term for a silly media trend, which just so happens to mainly feature women.

Male Karens DO exist, I admit that I am one. The problem is that male Karens have not been named yet, so let’s fix it.

What Should we call male Karens? ‘Keiths’? ‘Kagney’s’? or the old term, ‘angry bastards’?

Is the term ‘Karen’ racist?

Next, let’s look at the allegation that calling angry white women who in some cases are seen to act overtly racist ‘Karen’, is itself racist. This is an idiotic argument, it is not racist! The only people who I have seen attempting to make this argument unironically have been the same fools who argue that “white lives matter” is not a racist statement! Public meltdowns are not restricted by race or gender. (And FYI: “White Lives Matter” is without question a racist statement!)

Bringing race into the discussion done is an attempt to deflect the point of why most of these videos have made their way online; It is an attempt to project the negative behaviour back at the person who recorded the video, or the people who see the behaviour as antisocial. It is important to remember that the actions in these videos, regardless of terminology, should probably not be defended. Yet here we are, it’s 2020 and society is littered with people who misrepresent the truth to promote hateful ideologies.

What is the ‘Karen’ trend about? – My view

The ‘Karen’ tag is only ever attributed to people who are behaving irrationally abusive over the smallest of issues. Getting so angry about non-issues, like wearing a mask or standing up for others, creates this appearance that they think they are above everyone else.

They arrogantly think societies rules and manners don’t apply to them; And when they are challenged, they play the victim, occasionally wrecking the world around them.

In other cases, anger is racially motivated. It is unclear if these people are trigger happy racists who are dying to get someone in trouble, or if they are genuinly scared of black people. What is most worrying about the racial element of Karenisim is that it’s this same sort of irrational fear and anger which leads to potentially racist police intervening and innocent people dying. That is what happened with George Floyd’s killing and with many other police killings of innocent black men in the states.

Why the ‘Karen’ trend is important

The reason most ‘Karen’ videos have been shared in the first place is to expose the toxic behaviour they document. What we see in these videos is not nice. It’s one of the less attractive sides of humanity. While we dont like them, and at the end of the day a few of these women will be salty that they have become virally infamous – These clips are important to the development of humanity.

We can learn from these incidences and grow as a society.

These videos should be seen as a lesson to everyone, man, woman, any race, any religion and any nationality, there is something to learn! We all need to dial it down a bit, online and offline. It’s simply not worth it!

We live in one of the most taxing periods of time, maybe ever. Many of us have no real freedom and alot of those who do live in the fear of further Coronavirus outbreaks. Add to that the growing racial tensions caused by groups exploiting the current climate of fear to spread hate-filled agendas; And it is no surprise there are people who snap under the pressure.

My last word on ‘Karen’, is that while it’s good to put a name to behaviour; In the future, can we use a term which is not a person’s name?

The only people I feel bad for are the REAL Karens!

In future, let’s try and show patients and compassion to others. If you feel yourself getting angry over something in a shop, or a pub, street, park or anywhere public; don’t let yourself get angry. Leave the scene for a moment, take a deep breath and try to keep a cool head.

Trust me, it’s not worth it!

EDITOR NOTE: Hey VB Readers. I wanted to say thanks for reading this and our other articles! After ALOT of thought and chat with others on the topic, this is the last time we will directly use the term ‘Karen’ as we feel it is a bit tacky. We don’t think the is overly offensive, we just think we can do a bit better.

Consider this article as VB getting the Karen trend out of our systems!