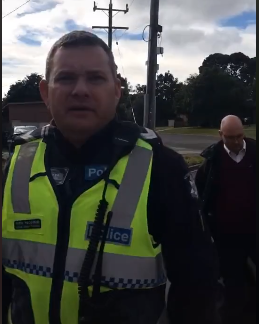 The eye-opening moment where a White Australian police officer threatened an Aboriginal man “if you record it, I’ll smash it out of your hands”, after the citizen had issues paying a £1.25 bus fare!

He only wanted to catch a bus

Mr Norris of West Gippsland, Victoria, went to court to clear his name after a previous court convicted him without evidence. The incident highlights Australia’s issues with institutional racism.

The incident stemmed from an overreacting from a bus driver. Norris’s bus fare payment card failed to work, in response the bus driver called the police!

When the police officer arrived on the scene, Norris felt threatened and began to film what was happening. The officer saw Norris filming and told him: “if you record it, I’ll smash it out of your hands”. Norris asked the officer why would do this, and he claimed: “because I can”. The young man said, “the bus driver was probably racist”.

Norris, 26, became worried the officer was going to be assaulted, so he ran home. “I live close”. “I ran and started screaming out to my Mum”.

Once police caught up to Norris, he was issued with a number of unjustified charges including calling the officer “a white dog”. Mr Norris’ lawyer Andrew Papadimitropoulos said ‘none of the crimes was shown in the video Norris recorded’.

Mr Papadimitropoulos said, “in my opinion is that they should have been dropped from the start”. “The allegations were not supported by the video”. Magistrate courts found Norris guilty without evidence. “It would have been difficult for a young Aboriginal man to defend the allegations unless they had been captured on video”.

Norris posted the video in the light of the Black Lives Matter protests and the death of George Floyd. A recent study showed that almost three-quarters of Australians are “bias against aboriginals”.

Courts found Norris not guilty of the 2017 allegations after an appeal. Victoria Police have not commented on the incident.