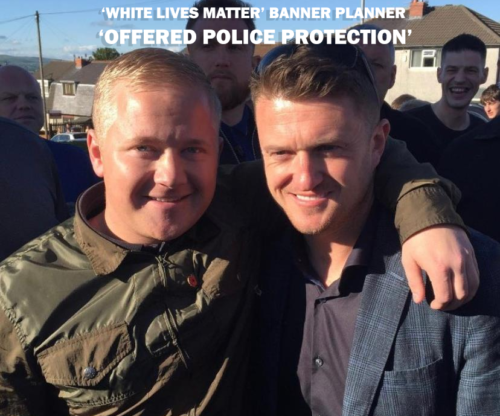 Speaking to the Daily Mail, Hepple, 24, claimed he was not racist, telling reporters “I’ve got lots of black and Asian friends” before claiming “this banner was actually inspired by the Black Lives Movement. We were not trying to offend the movement or black people. I believe that it’s also important to acknowledge that white lives matter”.

The stunt attracted criticisms from many; Burnley FC banned everybody involved from all future matches. Hepple and his partner have both since lost their job due to the stunt, and the uncovering of racist social media posts by the couple.

Tommy Robinson supporter, Hepple, and his conspirators claim the message was inspired by the Black Lives Matter. BLM activists attacked the stunt as ‘provocative’ and ‘racist’, stating that the racist stunt displayed a complete misunderstanding on what the Black Lives Matter movement aims to achieve. One BLM supporter told VB “No one ever said White people dont matter”.

Police in Lancashire said the stunt had “caused offence to many people in Lancashire and beyond”; although, the force confirmed no crime had been committed.

Following the stunt, Hepple claims that he was offered police protection following the stunts backlash. A defiant Hepple told facebook “I’d like to take this time to absolutely f***ing nobody”!