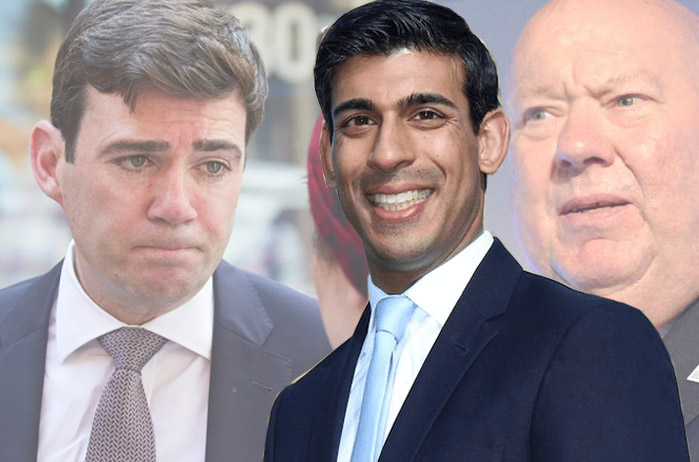 Rishi Sunak’s latest attempt at helping businesses has been slated as “stingy” by the North’s Mayors. The local leaders are threatening chancellor Sunak with legal action over the “stingy” second furlough plans.

Boris Johnson is set to announce his latest ‘three-tier’ system this week the in the hope it brings Coronavirus back under control. The plans are set to see most pubs, bars and indoor venues close their doors in the most at-risk areas (Tier 3) areas.

Northern leaders fear the new rules will unfairly affect people and businesses, turning much of the north into a ‘permanent open prison’. At present, the North of England is facing the most serious outbreaks; The ‘tier’ system will see most of north England placed into “tier 3”.

On top of threats of business closures, leaders are angry at the lack of financial help for workers. Sunak’s second round of furlough is set to pay only 66% of an employees wage, an amount many feel is wholly inadequate. Labour sources claim only 1 in 15 jobs will be protected by the second furlough scheme.

Manchester Mayor Andy Burnham has appealed for cross-party support from MP’s, to push for a vote on a new support package that would better help people facing COVID hardship in the north. Burnha, says the current plan will ‘level down the north’.

The Mayors of Liverpool, Liverpool city, Greater Manchester, Manchester City, Sheffield and North of Tyne have all signed an open letter to government appealing for fairer treatment and financial support.

Click here to read the open letter from Mayors to government here.

we are also worried that the more general business support package is woefully inadequate. Whilst we acknowledge the Chancellor’s move in increasing the existing payment to businesses forced to close in lockdown areas, £3,000 per month – or less for many smaller businesses – may not be anything like enough to prevent businesses from collapsing after what has already been an extremely difficult year. Many are now on a knife-edge and this payment will not be enough to save them. Again, we fail to understand why a local lockdown does not attract a business support package equal to that provided during national lockdown given that the effect is the same. More broadly, tougher local restrictions will have an impact on businesses across the local economy and we believe that there is a strong case for a discretionary grant scheme under the control of local authorities to help them.