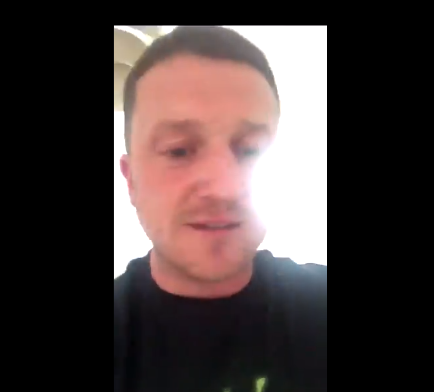 Far-right activist Tommy Robinson has called on supporters to ‘meet him in London’ next Saturday to counter Black Lives Matter protests.

This morning, Tommy Robinson posted an expletive-filled video which attacked Black Lives Matters protestors. The Islamaphobic influencer opined that police “daren’t enforce the law because there’s too many people that aren’t white”, in the video where he uses the term “white” more than a B + Q catalogue.

Robinson alleges police were attacked by violent protestors and police refused to act, as the protesters were “not white”. However, Reports from the weekend’s UK-wide protests are that they were mostly peaceful.

The only notable incidents from the weekend’s protests were damage to a statue of historic racist Edward Coulson. A Police Officer was also knocked from her horse when it bolted.

Earlier in 2019, a “free Tommy Robinson” protest in London led to 24 arrests. The crimes included violence against officers and possessing an offensive weapon.

The unhinged Robinson’s alleged that BLM (black lives matter) and ‘left’ groups like ‘ANTIFA’ have brought identity politics to the UK, and that BLM have ‘done more to break down racial barriers’ than “the national front ever done”.

Robinson’s video was laced with accusations and projections against ANTIFA, Black Lives Matter, the Labour party and left-wing groups.

Robinson concluded by telling his supporters “next Saturday, I’ll see you all in London”, as he tries to counter BLM’s anti-racist agenda.