Dear Toby Young: You are Wrong on ‘herd immunity’ AND the ‘second wave’. [Fact Check] 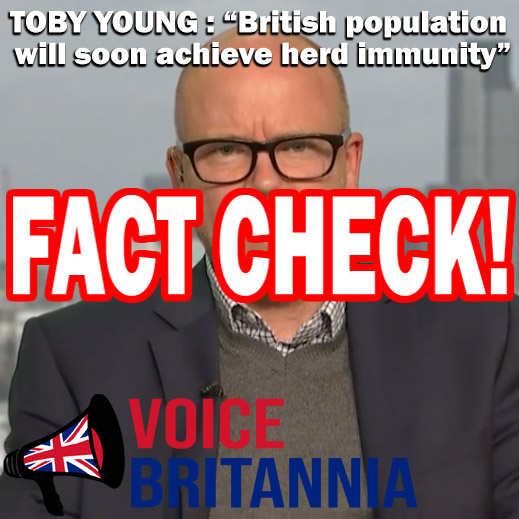 Recently, free speech advocate Toby Young has been making media waves with his “free speech union”. This weekend, Mr Young pivoted from trolling ‘cancel culture’, to telling the Telegraphs online readers that ‘herd immunity’ to COVID-19 was near and there would be no ‘second-wave’. VB’s Steve Smith responded to and fact-checks Tobys claims.

This morning, I stumbled across Toby youngs most recent article “When we have herd immunity Boris will face a reckoning” on the Telegraphs website. I am not a fan of ‘cancel culture’ and feel that media like this is best engaged with as opposed to ignored

First, I wanted to address his comment that ‘the (New York) population is already close to achieving “herd immunity”, and his claim that the UK ‘will soon achieve herd immunity’. A recent study (published by The Lancet) wanted to answer this same question and looked at seroprevalence of SARS-CoV-2 in Spain, at both the national and regional level. The Spanish study tested 35,883 (random) households, testing 61,075 participants for COVID-19 antibodies.

The results showed that only 5% of people had developed SARS-CoV-2 antibodies, meaning ‘herd immunity’ is unattainable.

We need to compare the Spanish study with what we are able to find out about the New York example’s Toby mentioned. It is important to mention that the New York example was not part of a clinical trial, rather, they were the most recent statistics by Doctors surgeries who were testing people who were showing Coronavirus symptoms, so the high positive rate is not surprising, it was expected.

The statistics from New York also came with warnings, as the results were not consistent. While clinics in the Queens area did record 68% of people having COVID-19 antibodies, over in the Bronx only 38% of people tested positive for antibodies.

We should also mention differences in methodologies. The only type of test we see reported as used in New York were ‘antibody tests’, which were used to test people who were showing COVID-19 symptoms. Antibody tests are made by over 200 different manufacturers with varying levels of accuracy and consistency. The Spanish study, on the other hand, used an approved ‘point-of-care antibody test’ and took blood samples.

Any study that wants to prove or disprove ‘herd immunity’ needs to look at seroprevalence of SARS-CoV-2 within society at a local and national level, in the same way as the Spanish clinical study followed, as this is the only way we can be properly assured either way.

Summing up the first point (sorry it was so long-winded), that the USA (or the UK) ‘will soon achieve herd immunity’; Both statistically, and scientifically Toby is wrong.

To claim that any part of society is close to herd immunity because 1 clinic, in 1 of New York cities 250+ neighbourhoods has reported a high amount of positive antibody tests, is a stretch!

The only other point I wanted to address is Toby’s view that ‘a “second wave” of Covid-19 is unlikely’. Thankfully, this will not need much explaining. As we can very clearly see from the ‘Daily New Cases in the United States’ chart below, America has already moved into its “second wave” and much like the 1918 Spanish flu epidemic, the second wave looks to be a lot worse than the first.

Looking at the ‘Daily New Deaths in the United States’, we can see that in recent days their daily deaths have begun to rise again, and as long as the daily cases keep rising, daily the deaths will rise too.

It really pains me that there is even a discussion over whether or not the states will have a second wave, when the statistics are recorded, freely available to all, and CLEARLY show that a second wave has begun. This is an argument that is veering into flat earth territory, the facts are facts, it IS what it is and that is a factual second COVID-19 wave taking hold in the USA!

To argue that any locality is close to ‘herd immunity’, that the second wave of Covid-19 is unlikely, and that these “facts” somehow point to Lockdown in the UK and the USA as being ‘unnecessary’, is seriously misguided at best, and damn right disgusting at worst.

Toby, I will address you directly here. I don’t care for ‘cancel culture’, so I would much rather engage people who use media to spread mistruths. This article equates to fake-news disguised as opinion.

I will leave you with one question; Honestly, what do you stand to aim from making people believe that Herd Immunity is real and we are free and clear from coronavirus? Do you like the chaos, the death, or are you just trolling? If you ever want to answer this, I am sure Voice Britannia’s team will assist in making it happen.

(At least we can agree on that cancel culture nonsense!)

What is YOUR opinion on this? Should people with massive audiences be allowed to mislead, or does free speech mean anything is fair game?