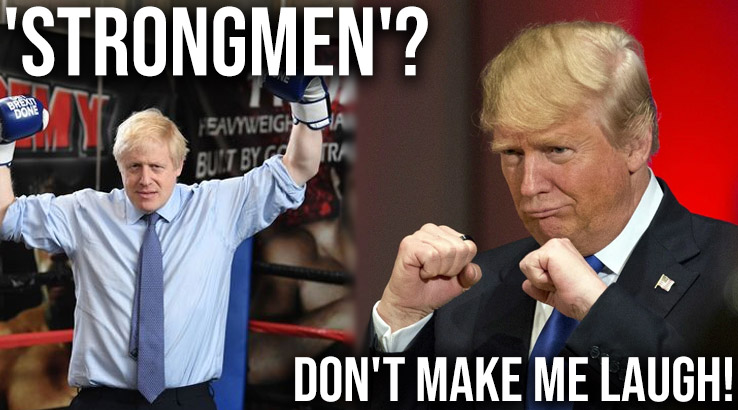 Are the likes of Boris Johnson and Donald Trump ‘Strongmen’ or is it just their bullcrap game that is strong? Mike Stafford breaks it all down.

Nearly a generation ago now, during the first truly colossal wave of reality TV programming, ITV aired ‘Bad Lads Army,’ a show whose premise was catnip for people of a certain political persuasion: a bunch of petty criminals and delinquents from the early noughties were put through 1950s National Service.

Partly a sociological experiment, partly an extension of the voyeuristic bullying of The Jeremy Kyle Show, ‘Bad Lads Army’ gave some viewers the giddy thrill of seeing wannabe hard-men broken down to what they really were; vulnerable young men.

The pretence of strength was erased, often amid desperate sobbing, revealing the soft and weak mass lurking behind the front.

It’s a common enough observation that there are plenty of men – and it’s almost always men – who go out into the world pretending to be much stronger than they are.

It’s impossible to navigate early adolescence without encountering your fair share of posers, braggarts and outright liars, and yet, for some reason, when it comes to politics, a small number of men still manage to pull the wool over a worryingly large number of eyes.

In our desire for a political ‘strongman’ to govern us, we can often miss what’s staring us in the face – the ‘strongmen’ we actually get really aren’t that strong at all.

Strong in speech not substance

Donald Trump came to power promising ‘I alone can fix it,’ in regard to a broken political system. The offer was clear; elect a strong leader, a robust CEO, and watch as he drags a grateful nation from the inefficient and frustrating swamp of democracy and begins charging again toward greatness.

What did the American voters actually get, though, when you really look at the man behind the fake tan? We know full well that if Trump were subjected to the ‘Bad Lads Army’ treatment, he’d be the first to burst into tears.

He flounces out of interviews if the questions are too hard; to diplomats, he radiates insecurity; he has spent three decades bristling about jibes over his small hands; he waits until he’s safely on the other side of the world before subtly accusing Putin of election-tampering. There is no honest definition of “strength” that includes this type of behaviour. If it’s a strong man you want, avoid Trump at all costs.

What of Trump’s transatlantic tribute act, Boris Johnson? His claims to strongman status are made less robustly than Trump’s, but it’s clear he would at least like to present himself in the same manner.

His staged press-ups made the front cover of the Mail, and the election campaign imagery of smashing through a wall with a JCB was a clear nod to his bullish approach to governing.

Cultivated carefully over several decades, Johnson’s public persona is just that – persona, something presented to others. Terrified of dissent, he appointed a cabinet of nodding dogs; his own mother cites insecurity as a motivation for his adultery, and though he may appear bullish when dealing with Brussels, Burnham, or the BBC; easy when acting through an intermediary. And, when the time came for him to show some strong management of the man standing opposite him in his office, he bottled it.

A strong leader would have shown Dominic Cummings the door over Barnard Castle, but Johnson’s moral cowardice wouldn’t allow him to do it. He couldn’t bring himself to look into the whites of Cummings’ eyes and send him packing.

Whatever your definition of strength is, it should certainly include having the courage to stand up to anyone who insults your electorate as grievously as Cummings did.

So yes, if it’s strength you want in your leaders, don’t look to the populist double act that is Johnson and Trump. Just like the delinquents sobbing in a televised barracks, their strength is all for show.