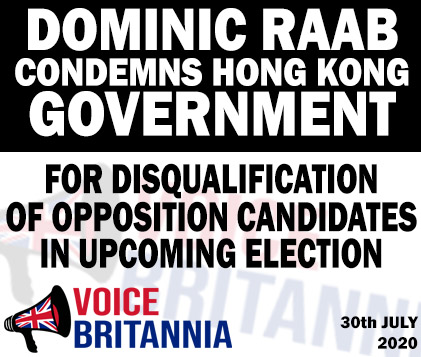 Those disqualified featured members of the Citizen party and political activists.

The Hong Kong government said they support the decision to disqualify more nominations; The government deny allegations of political censorship or restriction of free speech.

“It is clear they have been disqualified because of their political views, undermining the integrity of ‘One Country, Two Systems’ and the rights and freedoms guaranteed in the Joint Declaration and Hong Kong’s Basic Law.

“The Hong Kong authorities must uphold their commitments to the people of Hong Kong.”

Raab’s statement only hours after the Chinese Ambassador Liu Xiaoming claimed the UK was ‘poisoning’ relations between China and the UK. At this morning (video) press conference, Ambassador Xiaoming rejected claims of abuse of the nations Uighur Muslims and condemned the UK’s decision to block Huawei from the countries 5G network; Ambassador Xiaoming stated: “These actions have seriously poisoned the atmosphere of the China UK relationship”.