Boris calls last orders on the North! – Local Coronavirus Tiers will see pubs and restaurants in England close from Monday! 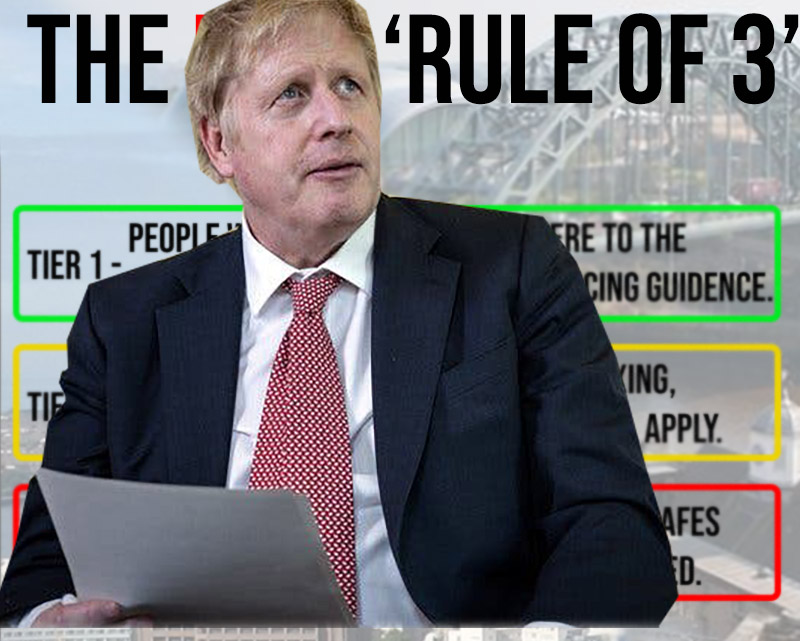 Boris Johnson is expected to announce a slew of tougher restrictions in the next few days; with pubs and bars closing in the North of England.

On Wednesday, Nicola Sturgeon Announced new restrictions for Scotland. From Sunday, for 16 days, pubs and licenced venues in Scotland will only be open 6 AM to 6 PM; With alcohol will only be sold in limited ‘outdoor’ venues. Areas within Scotlands Central belt however, will be forced to remain closed due to serious outbreaks in those areas.

Boris Johnson is expected to unveil new(er) restrictions for North England along with a new and improved “Rule of Three”. The three-tier system will essentially be the same as governments previous traffic light scale; just with a new buzzword for everyone to learn.

The plans have already faced fury. Owners of pubs, bars and restaurants worry that new restrictions could mean death for their businesses. however, the PM and his team somehow have to balance saving the economy with preventing a million deaths.

The government faces a potential backbenchers rebellion on the matter. Next week, parliament will be voting on Johnson’s questionable 10 PM curfew rules for licenced venues. Conservatives rebels threatened that unless things change they intend on voting with Labour against Government on the curfews.

However, speaking to Sky News on Sunday, Labour leader Kier Starmer stunned Labour members AND the growing group of Tory rebels who were looking at siding with the opposition. Of course, thats if government give MP’s the vote they had promised.

Tory backbenchers believe they are close to the magic 48 votes they need to defeat Government; Although, as we have learned over the years most Tory backbenchers are toothless tigers, all growl and no bite.

The next few weeks will be crucial in the fight against COVID-19. With cases closer to tripling weekly, as opposing to doubling; Boris is said to be desperate to take back control of the Virus.

Westminster sources told VB that the plan to close the pubs is being treated as a trial; with the hope that the ‘rule of 3’ and the closing of licenced venues will have a drastic effect on the spread of Coronavirus in England.