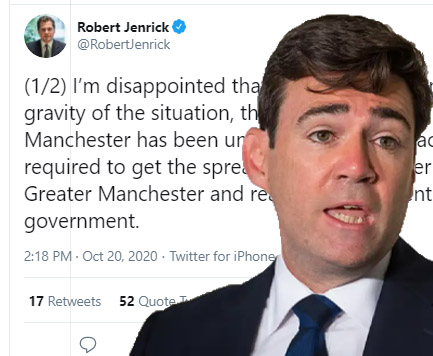 Governments Minister for Communities has announced that talks between himself and Greater Manchester Mayor Andy Burnham have concluded without agreement on the looming tier 3 lockdown of the city.

Robert Jenrick took to Twitter to try and get the jump on any statement by Burnham. Jenrick, Tory MP, attempted to frame this failure of the government, and his personal failure to reach an agreement, as Andy Burnham failing to ‘recognising the gravity of the situation’.

In reality, talks have collapsed as Andy Burnham has asked that government provide adequate support for manchester low paid workers who stand to lose between a third, or ALL of their income if the city is placed into ‘tier 3’ lockdown conditions.

This problem is far from being Andy Burnham’s fault. All Burnham was asking for was an additional £5 million on top of what Government was offering.

(Perhaps Burnham should have said Manchester needed the money to buy and sell PPE!)