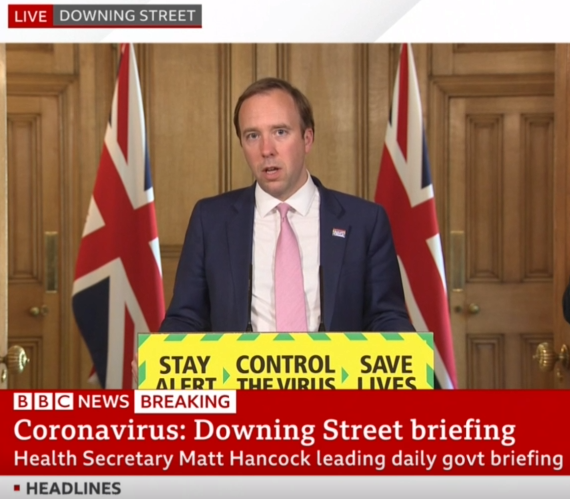 Todays Coronavirus ‘Downing Street’ brief was hosted by Health Secretary Matt Hancock, who was flanked by Prof. John Newton. The days briefing was a much briefer event than usual, lasting around only 30 minutes in total, with much of the time savings seeming to stem from a lack of Journalists asking questions.

The only message Matt Hancock brought with him to todays briefing was that everyone “get tested” if they are ill and that the NHS has the capacity to test, and then contact-trace as many people as is needed.

During the question and answer portion, Sam Coates of Sky News followed up on the contact-tracing topic, with questions on the transparency of the test and trace service amidst the reports of contact-tracers having nothing to do.

In an earlier reply to a question from BBC’s Hugh Pimm, Hancock had mentioned that ‘due to fewer people catching the virus, the contact-tracers have less to do’, Sam Coates, on the other hand, received no clear answer, then was muted by Downing Street’s Zoom admin when asking his follow-up question.

Hancock was also asked why the (English)change of advice on the shielding and isolation of vulnerable people had been ‘rushed through’ following the change of guidence at 10pm on Saturday (30th May) evening, as this has created alot of confussion with GP’s and people who were to be shielded.

Matt Hancock refuted the claim that the change in advice had been rushed, stating that “We’ve worked for some time to make sure that any changes that we make, and these are small cautious changes, can benefit people in a safe way”.

Questions remain on how it could have been possible for GP’s to be able to speak to and advise on the future healthcare of shielded individuals in the 33-or-so hours before the Doctors surgeries opened Monday morning.