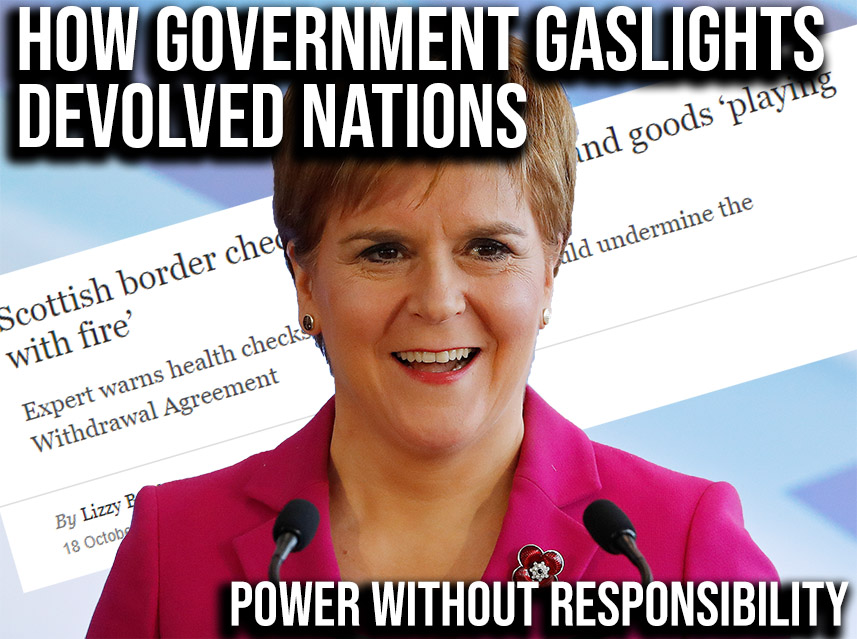 This weekend, governments favourite rag, The Telegraph, aimed it’s sighted at Nicola Sturgeon as they attempt to project blame for the coming Brexit storm on anyone NOT called ‘Boris’.

This is a great opportunity to look at how Westminster uses print (and digital media) to gaslight its political opponents.

On Sunday, the Telegraph reported ‘Nicola Sturgeon is accused of “playing with fire”‘ over plans to impose post-Brexit checks on goods coming into Scotland from Northern Ireland. This article is a political gaslighting masterclass. It aims to make Sturgeon/ the Scots Gov leaders appear duplicitous while framing the Westminster government as good people who are trying their best.

First, we have the hyperbolic description of Nicola Sturgeon ‘playing with fire’. It could be argued that during the Coronavirus pandemic every leader is arguably playing with fire; Although in this instance it’s not the pandemic they are talking about. (We will get to the ‘fire’ at the end).

The article alleges that ‘industry sources’ have told them that “health checks would be required on some goods arriving from the Republic of Ireland via Northern Ireland at the port of Cairnryan from Jan 1“.

From the 1st January, the Republic of Ireland will be a forign country in the same way as America, Brazil, Canada, Russia or literally anywhere else. This IS a direct result of Brexit. This is Brexit reality; Countries with physical borders with British territories are now treated the same as China when it comes to customs.

None of this has anything to do with decisions made by the Scottish government; This is a direct effect of Brexit.

Health checks on goods at borders

We could stop here, but let’s look at another example. The article attempts to conflate checks on good coming into Scotland with Coronavirus precautions by framing potential pandemic checks as unnecessary ‘health checks’.

The article says the Scots Government will use the devolved powers to do ‘phytosanitary sanitary and phytosanitary’ (SPS) on goods coming into the UK. The SPS checks protect against disease, pests and contaminants potentially entering the country.

The reality is that from the 1st January, check on goods coming into the UK from N.I will happen. The plans have already been put in place by HMRC / Boris Johnson’s government. On top of any customs checks that were going to happen anyway, there is still the whole CORONAVIRUS PANDEMIC situation to deal with.

It is also worth noting that HMRC changed the rules on ‘moving goods and clearing customs during the coronavirus’ in April. However, the article fails to mention this or how this has already affected goods coming into the UK.

I hate to use the term, but it is a MATTER OF COMMON SENSE that you are going to place extra checks on goods (and people) coming into the country during a global pandemic! This is called using one’s brain!

SCOTLAND will undermine the Withdrawal Agreement?

In a hilariously twist, the writer. via a ‘think tank ‘expert’. claims the “health checks” could “undermine the Withdrawal Agreement”.

This is the same withdrawal bill that Prime Minister Boris Johnson has already legislated to break! But, believe it or not, this was not the ballsiest line, we still have that rhetorical right-hook cocked waiting to strike!

The icing of this bullsh*t cake (sorry); the writer’s think-tank chum tells us that Sturgeon: “is playing with fire because the Northern Ireland Protocol is quite a delicate balance”.

So, to sum the claims up, the article alleges:

The Telegraph publishes articles like this every single day. Conservative politicians are hard-wired to lie, as is their supportive media.

This will never change, so never forget this lesson and avoid sycophantic RAGS like the Telegraph!