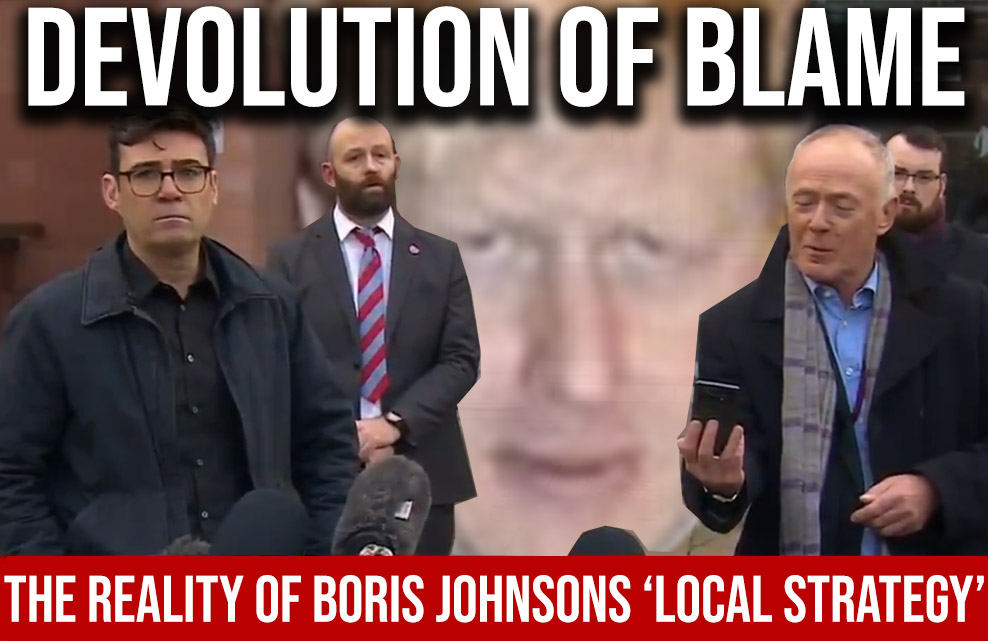 As I sat wasting another summer evening watching a Downing Street briefing, Boris Johnson announced a localised approach to the war on COVID19. Apparently, THIS was the way the UK could gain control over COVID-19.

Now, in October, I sit in disbelief as government’s local strategy turns to liquid faeces; All while Boris Johnson slithers from the firing line!

This week, the impetus of the ‘local strategy’ was laid bare. This is not about dealing with the Coronavirus pandemic in any sort of cohesive way. This strategy is about passing the buck to local leaders; with any leaders who disagree with the level of ‘help’ offered being publically humiliated by Government.

Andy Burnham was the first to be publically pantsed by Johnson. Why? Well, the Mayor of Greater Manchester had the audacity to ask for more help for the people who voted for him; Not just for those who can afford the 1/3 drop on wages. but everyone, whether they were freelance, zero-hour or on a minimum wage.

Burnham was not asking for an unreasonable amount, only £75 Million, and even then £22 million of that was to improve Test and Trace in Greater Manchester. Greater Manchester has more 2.8 MILLION mouths that need to be fed AND kept warm over a winter that will be filled with restrictions, unemployment and despair. As the day rolled on, Governments deal-maker, Robert Jenrick held firm that Government would only offer Burnham £70 Million; Nothing more, but obviously a lot less if Burnham kept rocking the boat. And, in the eyes of Jenrick, he did rock the boat!

In the end, the Government walked away from the talks over the measly sum of £5 Million pounds. Boris Johnson felt that asking for money to look after the poor was a step too far. The government then twisted the knife by announcing that Greater Manchester would only get £20 million in help; which equates to a measly £7 per person.

All the Mayor wanted to do was help people, and in return, Boris Vader treated Burnham more like Lando Calrissian. He altered the deal, prey he does not alter it more.

It would seem that the local strategy is more of a postcode lottery; with those living in a good old fashioned Tory postcode getting the best help.

Ironically, the man who failed to make a deal with Greater Manchester, Robert Jennrick, managed to land his own constituency with an amazing package of support!

Jenrick is the MP for the sleepy town of Newark, famous only for its royalist allegiance during the English Civil war in 1642. Population wise, Newark is home to (according to the 2011 census) only 37,084 people, which would equate to 1.28% of Greater Manchester’s population.

How much help did the people of Newark get? £6 per person? £8 per person? Think higher, MUCH HIGHER. Robert Jenrick managed to land £25 MILLION in funding for his constituency, which equates to around £675 in help PER PERSON! On what planet is this fair?

As we move deeper into the second Coronavirus wave Boris Johnson’s ‘local strategy’ is morphing into a policy of divide and conquer as opposed to fund and help.

Governments treatment of Greater Manchester, and in fact most of the UK’s areas which did not vote conservative is disgusting. This is way beyond the scandal, this verges on criminal. Culpable negligence.

The local strategy is being laid bare as a method of passing the blame from Westminster to local leaders. Bypassing funding, control of Test and Trace and control of lockdowns into the hands of councils, the Prime Minister is passing, and in some cases FORCING his responsibility onto other people.

The harsh reality is that Boris Johnson’s local strategy has failed, it is what led us into the second wave. Johnson is trying to wash his hands of the mess by wiping the crud onto councils curtains.

The Prime Minister is trying to devolve the blame while centralising all control. However, politically, its the best of both worlds. He is blaming everyone while controlling everything!

The conservative party have a long history of lying and blaming literally anyone else for their mistakes. The Tories lied about BSE, They lied about tainted blood giving people hepatitis, hell, the Proto-conserves even lied about the UK beating the Spanish armada. They always have been liars and always will be liars; and sadly, it would seem that even a pandemic cannot shake some heart and honesty into the Tories.

We are told that the buck stops with Boris Johnson; Let’s make sure it stays that way.