RAF Poseidon tracks Russian Warship across the North Sea on its ‘first operation’. 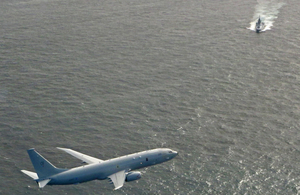 This Monday morning, One of the RAF’s new P-8A Poseidon aircraft, based at Kinloss Barracks, was called into action for the first time, to keep watch of a Russian Warship as it passed through the north sea.

The aircraft was called into action to provide a ‘prolonged overwatch’ of the Russian warship ‘Vasily Bykov’ as it passed through the North Sea (3RD August) close to British waters.

This mission marks the first non-training operation for the P-8A Poseidon aircraft. Since October 2019 the RAF has received 2 of the aircraft, which are made by Boeing and based off the 737 passenger aircraft. The P-8A Poseidon is built specifically for maritime operations which contains a ‘potent blend of tracking options and associated weapons able to find surface and sub-surface vessels’.

The Poseidon was joined on the mission by 2 Typhoon (euro) fighter jet from RAF Lossiemouth, and the ‘VIP Voyager refuelling aircraft’, which is based at RAF Brize Norton.

(This may be the same ‘VIP Voyager’ that Boris Johnson recently spend £900,000 to paint in the union jack colourings; We have contacted the MOD for clarification).

Minister of State for Defence, Baroness Goldie said: “In an increasingly unstable world of persistent challenge and competition, it is important that the UK Armed Forces possess cutting edge technology to meet threats wherever they emerge.

“The sight of our new Poseidon aircraft, working in concert with the Royal Navy has showcased the UK’s readiness to defend its waters from any incursion.”