Churchhill urination outrage was FAKE NEWS! This DID NOT HAPPEN (in 2020)! [Editorial] 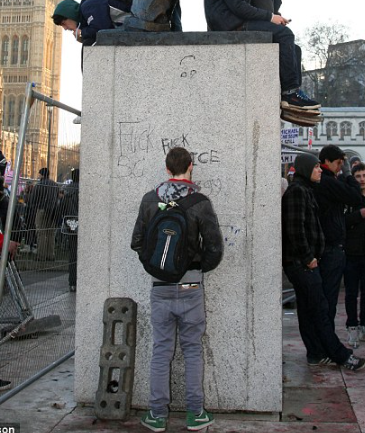 Rarely, Voice Britannia WILL respond to claims from readers as we respect everyone who reads our content, but importantly, we also care about truth!
This is why we are TELLING you that the ‘man peeing on Winston Churchill statue’ story from this weekend, was 100% fake-news!

Over the weekend, we reported on the counter-protests in London in as fair and balanced a way as we (or anyone else) could. We expected complaints, as that’s what happens in news-media these days, but what we were not ready for was so many people demanding that we report on incidents did not happen.

In this short editorial, I want to talk about the most infuriating of the ‘fake news’ stories that people were demanding us to report on, and that is the story of the Man who was alleged pictured to have urinated on the Winston Churchill statue during a ‘Black Lives Matter’ protest.

When we were sent this image on Saturday, our response was the same as it would be to any allegation of criminality at the Black Lives Matter or Far-Right protests, we investigated.

Now, let’s pull the curtain back a little; I am going to show you all how we work out if an image is real, or not. When I or most other journalists are presented with an image like this, we will use a reverse image search to see if the image already exists online. For me, my go-to tool is a reverse image-search tool called “Tineye“.

As the internet has evolved, Google and other search providers have added reverse-image search to their sites; Google chrome will even allow you to reverse search an image in 2 clicks!

If you want to get the most from this article, follow along, do what I am showing you, or use any other image search engine, and find this out for yourself. Do not take mine or ANYONE else’s word for this. Let the truth speak to you, personally!

The TinEye search for the infamous image of the man urinating on the Winston Churchill statue gave us the following results. Conveniently, TinEye provides us with the dates these images were first found online by the search engines.

If we scroll down to the bottom of the page, we are able to see the first time this image was found (uploaded) online by the TinEye search engine!

On page 3 (of 3), we finally get to what seems to be the source of this image, or at least the oldest recorded use of the image. As we can see here, TinEye tells us that the image, which was apparently taken during Londons Black Lives Matter protest, was actually taken in 2010.

A further search of the image, but this time using the google image search. I did this second search to see if the image had found its way to any, more credible sites. Within 30 seconds I came across an article by the Daily Mail, again on the 10th of December 2010.

The truth behind the image is that it was taken in December 2010. The protests shown were in response to Governments introduction of “tuition fee’s” to English universities. This image was NOT taken at the Black Lives Matter protests in 2020, and happened before Black Lives Matter came into existence.

The question of why people do this and Why do people try and mislead society in such an underhanded way, as things we can only ever speculate on. What we do know is that in 2020, a lie make it round the world in 5 minutes and there are many who use these lies for the attention. In the old days, attention seekers would annoy you on the street, now, they are able to antagonise the world, while they sit watching tv, without getting out of bed!

To anyone who was conned by this image, please do not be offended, it happens! PLEASE, Do not write this off as ‘bias news’ then continue to follow the same people who are feeding lies to you. There is nothing wrong with making mistakes; Mistakes are here to be learned from! We all make mistakes, and we have all felt silly through being misled by something or someone we trust.

At Voice Britannia, we only ever aim to post stories which are verifiably true! We will never, ever knowingly mislead our readers and if we make a mistake we will ALWAYS own up to it.

We have nothing but respect for every single person who reads our content and will not lie. Question EVERYTHING!

Boris Johnson’s “negotiations with the EU” statement – Translated into truth: Turn the Tables.

Lord Hall claims the BBC is not “the woke corporation”. – The BBC’s issues are bigger than wokisim!