“Clapping won’t save the NHS.” – @Redsarah99 comments on her viral video, Boris Johnson and Keir Starmer 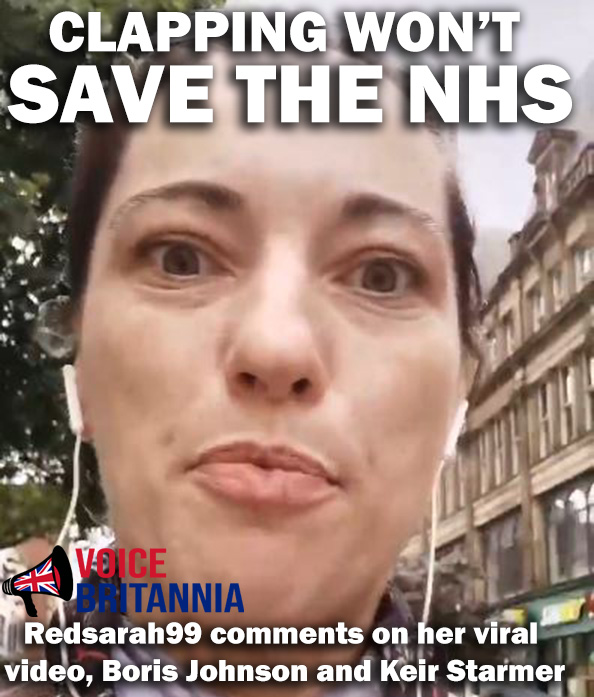 I spent some time chatting with Sarah. She is a good friend. We’ve fought, won and lost many battles together, and we will in the future. So I asked Sarah about the reaction to her viral video.

Now, while some of you might think the “Red” in Sarah’s Twitter handle is related to her strong socialist beliefs, I can reveal it’s actually a nod to her football team, the Red Devils, Manchester United.

Some of the most popular comments are “heartfelt” and “powerful” – and quite a few marriage proposals too!  So I asked Sarah what it feels like to go viral.

“The viral thing is so weird mate, my inner x files geek is freaking at so many people seeing my face, the part of me that wants a social revolution in this country is buzzing.”

Sarah wasn’t even aware of her amazing achievement until someone pointed it out to her.

“It’s strange, I don’t really pay much attention to anything outside of politics/activism etc, and my only social media is Twitter, so I didn’t even realise until I saw Twitter user Wolfie’s (@Tpopularfront) tweet saying it had received 1 million views. I just hope people agree with me and become more active, because clapping isn’t going to save the NHS.”

The engagement with Sarah’s video has been quite something. It’s absolutely everywhere. I asked her what she thought it was about this particular video that caught people’s imagination.

“I think a lot of people are angry at the way the NHS staff have been treated, the clap for the NHS started to show support, but what’s the use of that when the government can’t pay them a decent wage? Or provide basic personal protective equipment?

“Our amazing, underworked, underappreciated NHS staff, all of them deserve so much more than platitudes and claps”.

Ain’t that the truth?

Sarah has gained at least 2,000 followers off the back of her viral video, at the time of writing, so I asked Sarah if her growing Twitter following can expect more of her powerful and passionate videos in the near future.

“Yes. I’ve been doing videos since the general election campaign, because there’s only so much you can say in 240 characters, and our country is so broken at the moment it really upsets and scares me.”

Sarah goes on to say, “we have 4 million children in poverty – Children are eating from bins for god’s sake. And a media that literally edit’s the news for this racist criminal government, So yes, I’ll be doing videos until we have a media that isn’t as racist and lying as the government itself.”

This will come as great news for Sarah’s growing army of Twitter followers.

I did a quick check and found some data for video views during the 2019 General Election campaign. At the time of writing her video is approaching 1.4 million views – some 500,000 more than the number that viewed Kay Burley ‘empty chairing’ James Cleverly, and 300,000 more views than the most viewed Conservative Party video during the entire election campaign.

When I pointed this out to her she replied with typical modesty: “wow! that’s really cool but very scary too!”

Finally, I asked Sarah, as a well known Labour supporter her views on the first few months of Keir Starmer’s leadership.

“I think he’s shown he’s a complete hypocrite, his people’s vote, the Labour report, the selective anti-anti-semitism. He stands for nothing but his corporate establishment donors and he shames the Labour name.”

Sarah goes on to say –

“I had people tell me during the general election that they’d kill themselves if the Conservatives got in again because they make disabled and vulnerable people feel like their lives are worthless.

“Starmer et al enabled that. They took our fees and sabotaged us all, and now he asks for unity?

“If it wasn’t so hypocritical and downright sick-making, it would be funny.

“And his Black Lives Matter actions, absolutely everything about it.

And so say all of us!

Thank you to Sarah for taking the time to chat. You can follow her on @RedSarah99 – and make sure you watch and share her fantastic viral video!