Commission for Countering Extremism publishes report on how ‘hateful’ extremists are exploiting the COVID19 pandemic. 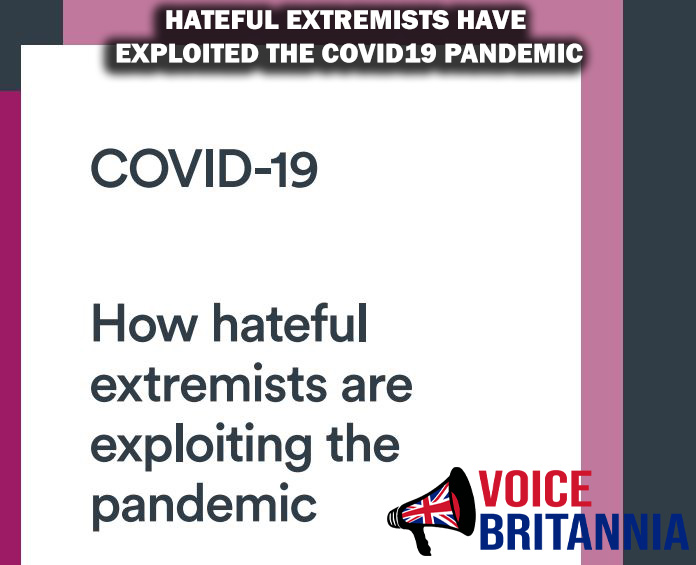 Today, The Commission for Countering Extremism (CCE) has published a report which looks at the way in which extremists have exploited the Coronavirus pandemic to seed ‘hateful’ conspiracy theories online.

The report looks to bring attention to the large amount of conspiricy theories which hate groups have used during the pandemic, to sow division in society; with the commission talking about the uptick in British far-right and Neo-Nazi activities, the 5G conspiracy theory and anti-religious conspiricies.

The scale of the problem.

Studies by the commission found that 37% of people they spoke to had heard about the (ridiculous) 5G conspiracy theory; with a third of that 37% believing it is true. In April as many as 50 of the UK’s leading 5G masts were targetted by arson attacks.

A 21% increase in hate crime towards East Asian and South-East Asian people was reported; with people blaming them for spreading coronavirus.

The report also looked at the spread of fake news which was circulated on social media. A gigantic 90.6% of posts ‘containing misinformation’ were not acted on by social media companies after being reported by volunteers. One example of this was a fake post which ‘accused Muslims of breaking lockdown rules’ was shared 2700 times.

Overall, the commission’s report found that During the COVID19 pandemic there was an increase in far-right, far-left, anti-vaccine, anti-establishment (?) and racist conspiracy theories throughout society; with each group fulfilling their own ideological aims.

‘Hateful extremists’ are reported to have exploited the pandemic, and the overall lack of information to target groups fake news at people with the purpose of inciting hate within communities. The study mentions that the widespread de-platforming of the UK’s far-right influencers has seen many of them and their followers move to fringe social media platforms like GAB or VK, where they can freely spread hate.

The commission believes that the pandemic will create a breeding ground for hate, with extremists looking to capitalise on the socio-economic impacts of COVID19; targetting those who have been left vulnerable by the damage and instability caused by the COVID19 pandemic.

How can we solve this?

The report concluded by recommending that government create clear plans to counter the increase in extremism, with the creation of a new ‘urgent’ counter-extremism strategy.

Assessments of who is most vulnerable to extremist narratives need to be undertaken, with plans to intervene and engage with those who may be targetted. A new ‘online harm regulator’ should be created to enforce laws on inciting racism online; However, the report does not say how people would be assessed, and whether this would be done demographically, or directed at individual citizens.

The report also says that plans should be created so that government can develop an understanding of how conspiricy theories contribute to extremism, and how they are used by extremists to spread hateful discourse. They state the plan must commit to building a system which can classify conspiracy theories based on the harm they cause.

Separately, a recommendation is made that the ministry of housing and communities should create a ‘COVID19 cohesion strategy to bring communities together, hopefully preventing race or religion based extremist narratives from spreading as far as they do now.

This report will be seen as a step in the right direction for many (like us) who find they are targetted by people who want to spread race or religious-based hatred via social media. The report points out how the large-scale banning and de-platforming of far-right influencers has forced them ‘underground’, potentially making the problem worse.

The time may have come where society needs to stop blocking and cancelling, and move towards engaging people and stopping them from sliding into extremism.

Do you think government needs to do more to counter hate online?