Farage, the ‘Migrant Crisis’ and the UK’s march towards fascism – Its time to pay attention! 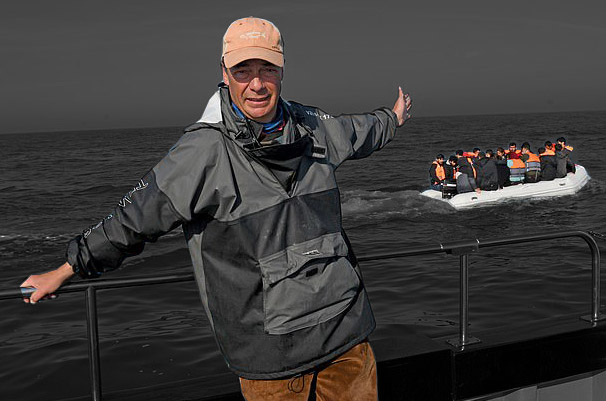 As I write, 41,499 (or more) Britons officially lie dead from COVID, and the UK is on the brink of the worst economic slump on record. For some reason, though, self-appointed guerrilla journalist Nigel Farage is currently broadcasting about what he presumably sees as the greatest crisis facing the UK at the moment – dinghies filled with refugees heading across the Channel to Britain.

You’d think Farage, a man who has already delivered on his life’s mission to get Britain out of the EU, would be content to wander off into the sunset years of his life, drinking pints of bitter and boring his local barman about cricket. The fact that he isn’t, tells us an awful lot about him, and potentially a lot about the direction of the country.

I’m not going to justify paying attention to Nigel Farage. “Ignore him and he’ll go away” won’t wash. Farage is a walking advertising campaign for racism, but unlike adverts, you can’t ignore him and reduce his power.

British society can’t ignore Nigel Farage, because British society is currently being remodelled (by the ruling party) in his image. Since the purge of the ‘moderates’ in 2019, the only meaningful differences between the Conservative party and the Brexit party are that one has Anne Widdecombe and the other has Rishi Sunak.

Nigel Farage, never elected to the House of Commons, has shifted the policy positions of government in this country in such a dangerous direction that we now need to educate ourselves, in detail, about how fascism takes root in a society, and where it leads.

Fascism arises, in part, due to weaponised resentment. Racial tensions are stoked up, particularly during crises entirely unrelated to race or ethnicity. The fascist benefits from these, and garners benefits from a) shifting the blame away from their own failures, and b) being seen as ‘strong’ on matters like immigration, race, or ‘national identity’ (crude code for the former).

The ‘migrant crisis’, a ludicrous shorthand for a handful of people risking death to get to a safe country, is the current focus of the weaponised resentment wielded by Farage, and the politicians who follow this Pied Piper of Prejudice towards the far right, namely Johnson, Priti Patel and the rest of this Conservative government.

Even a ‘solution’ to this confected crisis will not abate the rightward slide of politics, because weaponised resentment will have demonstrated its effectiveness again, and will continue to be the best tool in the armoury of the current government.

This is why we need to be concerned. A former lecturer once tasked my group with proving or disproving the assertion that the Wannsee conference (a 1942 meeting between high-ranking Nazis) was entirely responsible for the Holocaust. It wasn’t, of course. The chaos and horror that fascism leads to is not ushered in by rubber stamp, or by public policy pronouncement, or by the unveiling of imperial eagle symbols.

The worst end-products of fascism come through continued use of weaponised resentment; seeing every problem as caused by the ‘other,’ and seeing persecution of that ‘other’ as the solution.

A society creeps and creeps towards ever-worse outcomes until eventually, it’s no longer recognisable.

This government, purged of competence and beset by crises both self-inflicted and external, is covered in warning signs for anyone with a grasp of 20th-century history. It’s no longer enough to proclaim that to be ‘alarmist.’

The US already presents a glimpse three years into a potential future, in which unmarked government vans snatch civilians from the street. Until voices like Farage are considered irrelevant not just by us but by the ruling party, we need to hammer this administration at the ballot box, opinion poll and public sphere at every opportunity.