Government promise ‘production lines will make millions of face coverings each week’ in the UK. 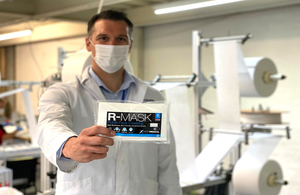 The ‘chancer’ of the Dutchy of Lancaster, Micheal Gove has announced that the UK government is to set up a series of PPE production lines in cooperation with manufacturers throughout the UK.

Todays statement claims that manufacturers will produce millions of masks each week! Michael Gove said: “These production lines will be able to get millions of face coverings to the public, without putting any additional pressure on NHS supply chains.

“It is fantastic to see companies in Lancashire, Neath Port Talbot and West Lothian coming together to provide face coverings for every corner of our United Kingdom.”

The government statement contained comments from the Secretary of State for Scotland Alister Jack, and the State for Scotland for Wales Simon Hart both gave glowing praise for the projects. It is unclear if any of the PPE made within the devolved nations will be used in their home nations, or distributed elsewhere around the UK.

UK Government currently has well over 5 Billion items of PPE in storage and has issued ‘private procurement contracts’ worth hundreds of millions of pounds for PPE, from companies who have no history in making or selling PPE. Could government be buying too much PPE?