There was nothing ‘Super’ about ‘Super Saturday’: Rachael Swindon 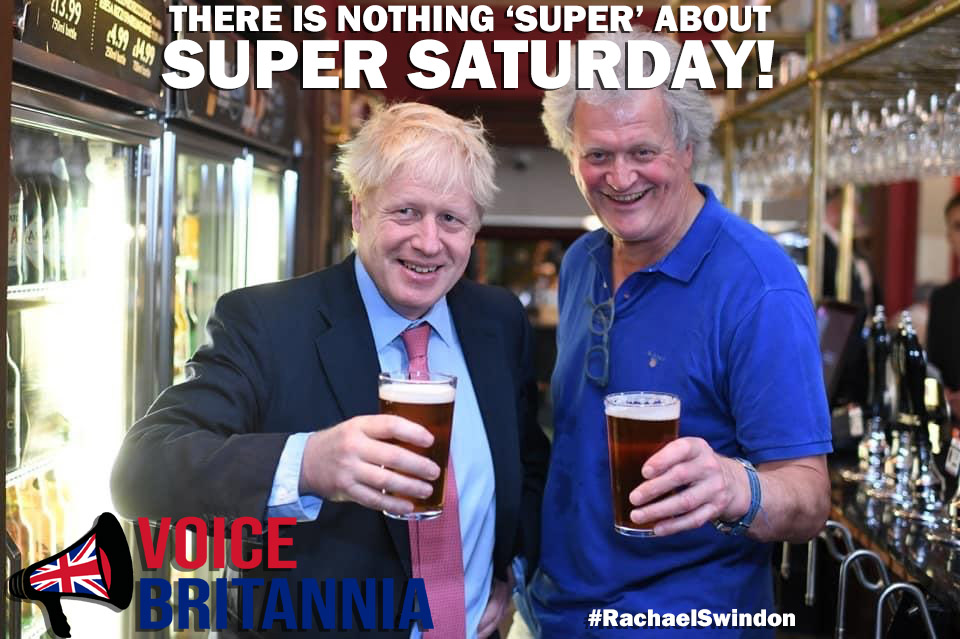 In the lead up to this weekends ‘Super Saturday’ and pubs around England being allowed to reopen; Rachael Swindon is back to spit some truth on the realities of ‘super Saturday’.

I haven’t got a clue who came up with ‘Super Saturday’, but there’s nothing super about it whatsoever.

It sounds like the sort of nonsense a filthy Murdoch tabloid would peddle, on the orders of the testicle-faced tax dodger himself; hoping to cling on long enough to see Michael Gove replace Boris Johnson. It is then his work is complete. Some people have no idea how far back go. But we’ll save that for another moment.

Saturday the 4th of July is nearly here. To me, it’s just another day, and it probably is for lots of people reading this.

Many of us are looking at reality and seeing an entirely different version to what is seen by those in power. You saw Bournemouth beach last week, the local authorities had to declare a major incident, you’ve seen what’s happened in Leicester this week, you’ve seen local case numbers steadily rising, and this is on top of the absolute catastrophic failure of leadership from Boris Johnson.

Never forget this one simple fact: when the world took action against Covid-19, Boris Johnson buggered off on holiday, to write a book. Is that what you call leadership or will you keep voting for this utter disaster because you secretly enjoy his subtle racism? Or you like his jokes?

There’s nothing super about Saturday.

There’s nothing super for somewhere north of 60,000 families, grieving at the loss of their loved ones to this awful virus.

There’s nothing super about filling care homes with elderly COVID patients, many left to die alone, to keep the pressure off the NHS. One day, this will be spoken about like the NATIONAL SCANDAL it actually is. It’s a stain on the conscience of Britain.

There’s nothing super about failing to support NHS staff, care workers, teachers, public transport drivers, and many others, with adequate PPE. They sold what we had to China, despite knowing we would need it, and then they concocted a story about planeloads of PPE from Turkey, which was another lie; and even when some did turn up, it was faulty. Absolutely useless. Without purpose. That’s your government summed up. Remember, these deceitful charlatans counted 1 pair of surgical gloves as two items of PPE for crying out loud.

Remember the haunting image of the 3 nurses dressed in bin liners, because they didn’t have PPE? It was reported that all 3 tested positive for Coronavirus. Seriously, there’s nothing super about that. Hancock and Johnson should be ashamed of themselves.

There’s nothing super about our failure to “test test test”. Have you kept up with the testing? They’ve constantly manipulated the figures and nobody has even got the slightest idea what’s going on. The “world-beating” test and trace app has been another humiliation for Britain. Another failure that will inevitably cost lives. But at least Dom’s mates have cashed in handsomely. Shouldn’t grumble.

There’s nothing super about the abysmal failure to lockdown quickly enough. The Cheltenham Festival went ahead – don’t forget the test and trace ‘tsar’ Dido Harding sits on the Cheltenham Festival board. Liverpool v Atletico Madrid went ahead. Around 3,000 Spanish supporters filled the bars and hotels of Liverpool – and they weren’t even allowed to watch a football match in their own country! How did we get it so wrong? People such as Professor John Ashton – who condemned the governments slow response – faced ridicule and was labelled a “ranting lefty” for speaking out about where the government were failing, and he was absolutely correct.

But don’t worry, that dangerous liability of a Prime Minister has a plan to lift our spirits. Let’s clap for the bankers to show our appreciation for their Herculean efforts during the COVID crisis. Seriously, he’s just trolling you now.

Finally, there’s absolutely nothing super about clapping on your doorstep on a Thursday, for an NHS that you voted to defund and dismantle, turning up in A&E on Saturday night, vomiting all over the place because you can’t handle your drink, you charmless f**king lightweight.

Only one person is responsible for delivering this disaster, and that is Boris Johnson. On one hand, the matted scarecrow tells local authorities to get a grip and deal with the influx of confused daytrippers, and on the other hand, he is telling you not to take liberties, but to shop until you drop and get out there and enjoy the weather. It’s a simple lack of clarity, intentionally, and a lack of leadership, unintentionally.

He knows exactly what he is doing. And so do I.

Enjoy your Saturday, however you choose to spend it. It’s been a tough few months for lots of people. But please, tell them where to stick their super Saturday, don’t be part of their experiment, and take good care of yourselves and your families.

Now, who’s joining me for a massive rain dance on Saturday morning?