Donald Trump interviews released – Trump knew how bad COVID-19 was in February but played it down to “avoid panic” (Watch the video!) 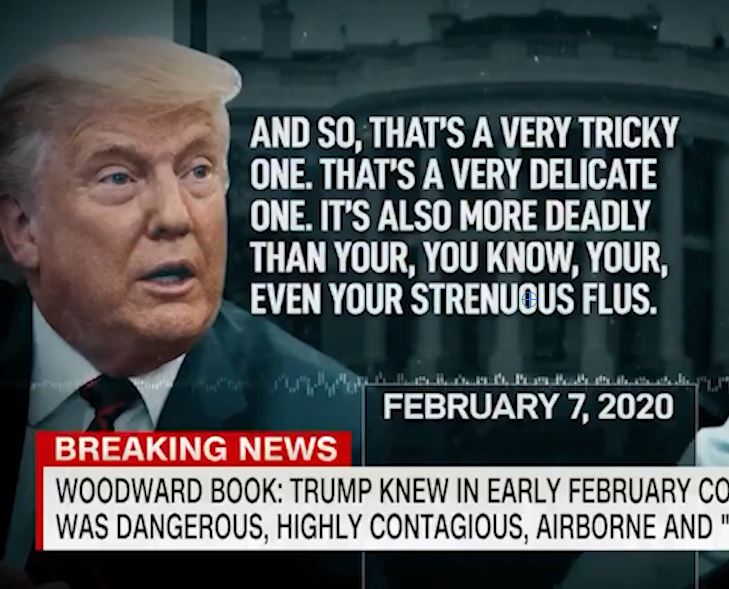 Explosive interviews between president Trump and Washington Post associate editor Bob Woodward have been made public. In the tapes, Trump is heard telling the author that he knew how serious COVID-19 was as early as February; But chose to “play it down, because I don’t want to create a panic.”

In February, Trump told Woodward: “It Goes through the air Bob. That’s always tougher than the touch. You know, the touch, you dont have to touch things. Right? But the air, you breathe the air and thats how it’s passed.

“And so, thats a very Tricky one. Thats a very delicate one. It’s also more deadly than your Strenuous Flus.

“This is more deadly. This is 5 per cent versus one per cent”

The interview shows that Trump knew that the virus was airborne, and at that point in February, he knew that COVID-19 was more deadly than ‘strenuous flu’.

Only 4 weeks later, Trump told Sean Hannity on Fox News that Coronavirus would not be as serious as influenza.

In response to the release of the tapes, Joe Biden said “President Trump knowingly lied to the American people. He failed to do his job on purpose.

It was a life and death betrayal of the American people”.

The implications of the interviews; and evidence that Trump knew how serious COVID-19 are likely to rock trust in the President. Bob Woodward’s book will be hard to avoid, and could spell the end of Donald Trump’s presidency.

To read the Washington Posts report on the tapes here.