FURLOUGH TO END IN OCTOBER, but dont worry, you will get 50% off a meal, IF there is a participating restaurant nearby! (Budget reaction) 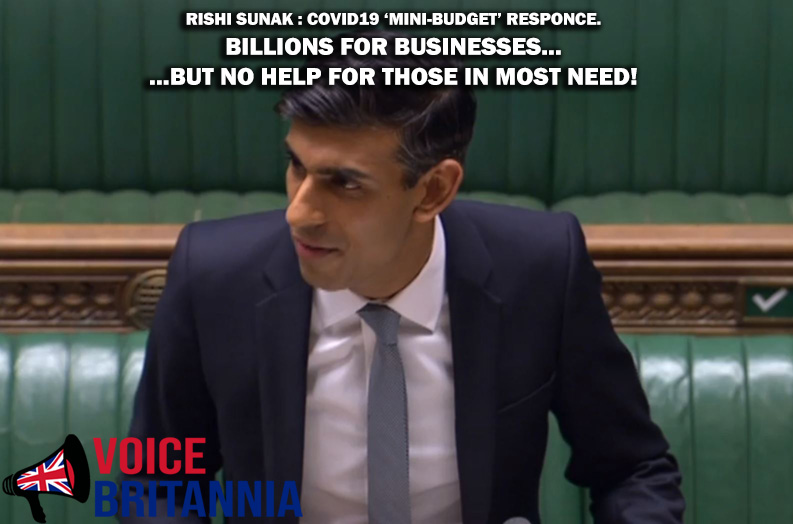 Chancellor Rishi Sunak addressed the House of Commons today to give his COVID19 ‘mini-budget’. Many were hoping that government would put their hands in the treasury pockets and help those in need; But instead, the chancellor announced that furlough will end in October as he looks for ways to put Britain ‘back to work’.

The majority of the chancellors budget focused on jobs, kick-starting employment and supporting employers in the hope they can push people back into the workplace. Neglected from the Chancellors summer statement was any indication of help for those who have lost their jobs or business due to Coronavirus; With all help being directed at big business and people who want to buy homes.

Sunak began by announcing an end to the Furlough scheme which has saved millions from losing their jobs and stopped businesses from going bust. The chancellor framed this move as a nicety, but in reality, there is nothing nice about this. Furlough has been the only thing which has kept food on plates and the lights on for many households and ending it so abruptly, with no thought to the future, is not only callous but irresponsible. People WILL lose their jobs due to this announcement.

The Chancellor announced a Job retention scheme worth £9 billion, which will see Government pay a bonus to employers who take and keep their employees back to work. This scheme will see EMPLOYERS receive a bonus for getting people back to work; not the workers who need the help most.

Another part of Sunak’s plans was to introduce a ‘Kickstart scheme to help youngsters to get a job. Again, employers will be paid to hire people, again, offering to give bonuses to businesses who can afford to hire and train apprentices.

The chancellor talked about a green recovery and announced a new £2 Billion ‘green homes grant’. This will see homeowners given vouchers to pay for energy-efficient home improvements; Bizarrely, the chancellor stated that low-income households could also take part in the scheme, and government cover the full costs of the improvements; However, many have been left scratching their heads over the concept of low-income households being able to actually own a home! (Earth calling Rishi!) Low-income households are predominantly within the rental market. What exactly does Sunak class as “low income”? £20k a year? £40k a year? £100k a year?

On Housing, the chancellor said people are not buying homes and house prices are falling (a good thing?). To get people buying homes, the chancellor announced he would cut stamp duty on homes UP TO £500,000 value, which again illustrates an absolutely tone-deaf approach to the governments helps packages, which seem to be aimed at people who already HAVE money, not those that NEED help!

Sunak announced help for hospitality and tourism. stating that its 2 million employees would be helped by government cutting VAT to 5% within these industries; claiming to provide a massive ‘£4 billion catalyst’ for businesses. One final measure for the hospitality industry was the unveiling of the “eat out to help out” scheme, which will see vouchers issued to citizens, which can be used to get a 50% discount on a meal at certain restaurants. (call me crazy, but we are putting our money on Wetherspoons being top of the approved restaurant’s list!).

Again, like every measure announced, the benefit of the scheme will go to the restaurant chains taking part, not for the people, many of which can bearly afford a good daily meal from LIDL, LET ALONE 50% OFF A MEAL IN A SIT-DOWN RESTAURANT!

Perversely, the Chancellor defended his mini-budget, stating that he is doing his best to look after those with the lowest incomes at the bottom of society! However, many have been left wondering how vat cuts to hospitality, cuts on stamp duty for half a million homes, bonus’s for businesses who rush back to work AND the end of of the furlough scheme, which has stopped millions from being forced onto poverty, will do ANYTHING to help those households who need the most help!

This mini-budget did nothing for those at the bottom of society! In the leadup to this mini-budget, sources close to Government told VB that Rishi’s personal plan involved giving everyone in society a £500 bonus to get people spending money. But, it seems his Government colleagues got the last word, and instead they directed the help at businesses… which are already worth billions.

Note from The Editor: We have been really busy today with the statements from Government. We will be catching up on any missed news this Afternoon! Thanks for reading and visiting Voice Britannia! (It been one BUSY day!)