Mic Wright: The nation doesn’t have a credit card and doesn’t need one: The media misleads you about governments and debt 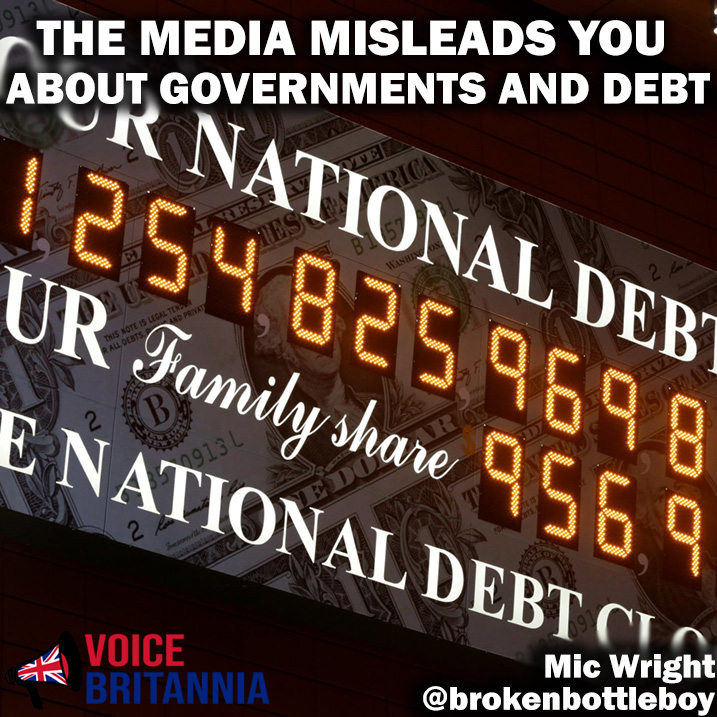 “We must pay back the debt.” That’s true of you or I but it’s not true of nation-states, particularly ones like the UK which have a strong record on international markets (they’re good for the money) and a relatively strong set of national assets, including a currency — the pound — which is the fourth largest proportion of foreign currency reserves.

The reason lots of journalists parrot political lines about the need to pay back national debt and get rid of deficits is ideological, not factual. It is the same line of thinking that ends up blaming the poor for poverty, the disabled for disability, and the disadvantaged for disadvantage. A nation’s economy is not like a household budget or a credit card. National spending does not have to nor should it abide by the rules of individual spending. Money at the global economic level does not act the same way as it does on a micro-level.

One thing you will hear often is that ‘if you keep printing money, it becomes worthless — look at Zimbabwe, look at the Weimar Republic!’ But that’s a gross simplification. It took a good while for both Weimar and Mugabe’s Zimbabwe to get into those situations and it involved not taking a range of other measures beyond quantitative easing — aka printing money — and manipulating inflation. The UK is not likely to hit a state of hyper-inflation without continued government neglect. Again, it’s more complicated than a home budget, the media just tells you it’s not at the behest of politicians that want you to believe everything can be explained in a simple way.

In most professions, deliberately misunderstanding things will get you fired. In journalism, it shows to the bosses — both of media organisations and, more broadly, the politicians — that you are a safe pair of hands, that you get it, that you know what can and can’t be said. Deliberate media ignorance around economic policy is dangerous.

Media ignorance and political manipulation around economic policies are the reason that immigrants have been so easy to demonise, why many towns and cities with large black and other ethnic minority populations have been neglected, and why the pro-Brexit forces could so effectively campaign and win the referendum. It’s all a result of dumbing down a complex interaction between many aspects of the economy. Instead, we’ve been told for decades that debt at a national level is as crippling as debt on a personal level, that we can’t have any gorge, but the government can gorge itself.

We live in a corrupt nation, with a political and media that enriches itself, then screams that we are all in this together. False narratives around economic policy are just one aspect of that.